#AceNewsReport – Oct.01: Morgan, 31, showed no emotion when the verdict was announced one day after fellow gang member Dwright Doty was convicted of first-degree murder: The jury deliberated about 10 hours since Thursday………..Doty, 22, with Morgan and another defendant waiting nearby, lured the boy from a park into an alley and shot him pointblank in the head, prosecutors said.

Tyshawn’s small body was left crumpled on the concrete in a case that shocked a city long accustomed to gang violence: “Even at a time when we’ve become nearly numb to headlines about violence, this case shook us to our core,” said Cook County State’s Attorney Kim Foxx in a statement…………….”I think often about Tyshawn’s 4th grade classmates who returned to school and sat beside an empty desk following this egregious murder and will be graduating 8th grade without their friend on stage later this school year. The trauma is far-reaching and impacts us all.”

Foxx added: “We hope that this verdicts brings some measure of closure and peace for the family of Tyshawn Lee, whom we will never forget.” ………….Morgan was tried in the same courtroom but before a separate jury……………..Prosecutors said the boy was targeted and “executed” as revenge after Doty and Morgan suspected the gang that Tyshawn’s father belonged to was behind the killing of Morgan’s brother………………..The juries listened to almost three weeks of testimony, and Doty’s deliberated for several hours.

The getaway driver, Kevin Edwards, pleaded guilty last month in exchange for a 25-year sentence, CNN affiliate WLS-TV reported. In August, Morgan’s brother, Anthony, was sentenced to four years in prison for buying the gun used to kill Tyshawn…………………Doty and Morgan, reputed members of the Black P. Stone Nation’s Bang Bang Gang, or BBGs, were looking to exact revenge for the killing of Morgan’s brother and wounding of his mother in October 2015 by members of the rival Gangster Disciples Killa Ward group, according to prosecutors.

Tyshawn’s father, Pierre Stokes, allegedly belonged to the Killa Ward faction: “Who in this world has a bigger motive to make sure that this happens to Tyshawn Lee than that man sitting right there?” Cook County Assistant State’s Attorney Craig Engebretson told the jury, pointing out Morgan……………”He has the motive,” the prosecutor said of Morgan. “This was a 9-year-old boy that was targeted and executed.”

Jury sees photo of body crumpled on the ground 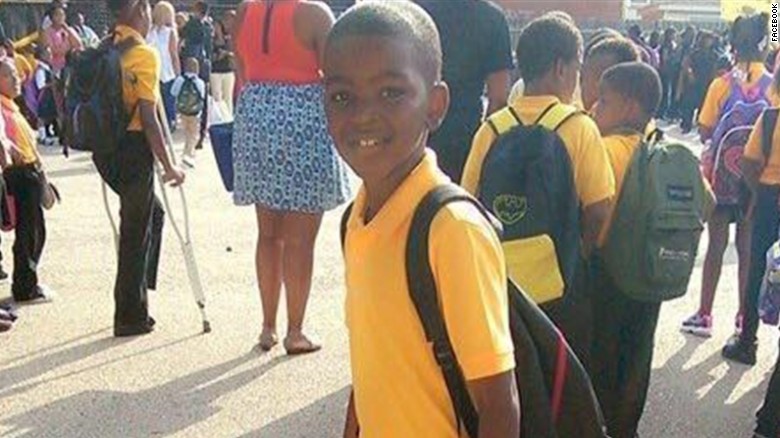 On a warm and sunny November afternoon nearly four years ago, Tyshawn was still in his school uniform when he told his grandmother he loved her and raced across the street to a South Side park with his basketball: In Dawes Park, Doty allegedly approached Tyshawn, talked to him and even dribbled the basketball to gain his trust, prosecutors said. He then picked up the ball and lured the boy to an alley. Morgan and Edwards waited nearby in a black SUV.

“Then it happens,” Engebretson said: “A gun is raised. A gun is pointed. Tyshawn sees it coming. He gets a hand up. He can’t do anything but he tries… Dwright Doty guns him down in that alley.”…………….An autopsy of Tyshawn’s body showed two perforating gunshot wounds, and part of his right thumb was lost as a defensive wound trying to block a gunshot, according to court papers. There was a gunshot wound to the head, a bullet graze wound to his right upper back, and a superficial wound to the right forearm.

Prosecutors showed jurors a photo of Tyshawn’s lying in the alley: “Tyshawn, nine years old, trusted this guy,” Assistant States Attorney Patrick Waller later told the jury that will decide Doty’s fate. “He preyed on the naivete of a nine-year-old. He was able to lure Tyshawn out of the safety of the park.”…….The killing was planned in retaliation for the shooting of Morgan’s brother, Tracy, who was fatally shot in a car by rival gang members while with their mother a month before Tyshawn was gunned down…………………Morgan was driven by “his desire for vengeance, to make those others hurt the way he hurt,” Engebretson said.

Morgan’s lawyer says his client was targeted by officers eager to solve a high-profile crime: The prosecutor argued that Morgan is as legally responsible for the killing as the gunman. He laid out the more than two weeks of evidence presented against the defendant, including witnesses who picked him out as being in the park shortly before the boy was killed and searches he made in his cellphone: Morgan, for instance, searched the Facebook pages of Tyshawn’s mother and father after the shooting, authorities said………….”If there’s ever been a case with more than enough evil to spread around it’s this one,” Engebretson said.”The shooter doesn’t get a monopoly on the responsibility. Everyone who participated, who planned, who acted, who looked out gets to join in that responsibility.”

Morgan’s lawyer, Todd Pugh, told jurors in closing arguments that prosecutors had failed to prove beyond a reasonable doubt that his client solicited or aided in the killing: He also accused police of manipulating the photo lineups in which a key witness picked out Morgan and “trying to shoehorn the evidence a little bit in a certain direction.”…………….Investigators were eager to make arrests in the high-profile shooting, Pugh told jurors…………..”Corey Morgan as a suspect made sense,” Pugh said. “He was a gang banger. He wasn’t going to win any civics prizes. His brother was murdered on October 13. His mother was shot.”

Doty’s attorney argues that Morgan brothers had ‘all the motive in the world’ Doty’s lawyer has argued that no one saw him killing the boy and suggested police named their client as a suspect because the city was pressured to make a quick arrest…………..In closing arguments Thursday, Doty’s public defender, Danita Ivory, suggested the Morgan brothers were behind the shooting………………”The ones with all the motive in the world,” she said, adding that a witness identified Corey Morgan as being in the park with a gun.

She also challenged the testimony of a gang member who testified that Dwright Doty bragged about killing the boy while in jail: The former high-ranking member of the Gangster Disciples wore a wire and recorded Doty describing how he lured Tyshawn into the alley and shot him, CNN affiliate WLS-TV reported.

Ivory told the jury that her client lied in order to impress the ranking gang member and to secure his protection behind bars: “Mr. Doty did what he thought he had to do to survive, and that’s to make up a lie,” she said.

Tyshawn’s death shocked residents and authorities: John Escalante, the then-interim superintendent of Chicago police, said that even in a city that has witnessed numerous gang-related killings, the slaying of Tyshawn “was something far more sinister.”