﻿#AceNewsReport – Oct.09: Fedai Varan, 43, has admitted fatally stabbing Emine Bulut, 38, in the city of Kirikkale on 18 August: Video shared on social media showed Ms Bulut screaming and holding her neck as her daughter urged her not to die………..The murder sent shockwaves across Turkey and triggered a debate over women’s rights in the country……………On Wednesday, Varan was transferred from a prison cell to the courtroom in Kirikkale under heavy security at about 09:00 (06:00 GMT).

Varan’s lawyer said during his opening statement that he personally had not seen any footage of the incident (in Turkish), and that his client would “remain silent” until they were able to “examine” and discuss it, news website Haber Turk reported: Varan is facing a life sentence.

Ms Bulut’s daughter, who has been receiving social and psychological support, was reportedly at the courthouse on Wednesday, but not in the courtroom where the trial is taking place: Women’s rights activists and representatives of women’s support groups gathered outside the building holding placards displaying photos of Ms Bulut with her daughter in her arms………….The women, who also held a large banner that read “we don’t want to die”, were not permitted to enter court to witness proceedings because of the large number of lawyers and reporters present, local media report. 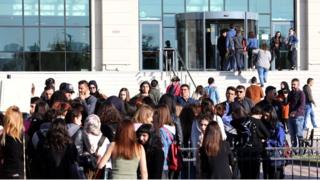 According to “We Will Stop Femicide”, a women’s rights platform, 354 women were killed in the first nine months of 2019.

What happened to Ms Bulut? …………..On the morning of 18 August, Emine Bulut took her daughter to the cafe in Kirikkale, about 70km (44 miles) east of the capital Ankara, to meet Varan, whom she had divorced four years earlier……….A short while later, Varan attacked Ms Bulut with a bladed weapon.

At an earlier court appearance, Varan said: “After she insulted me while talking about the custody of our child, I stabbed her with the knife I brought along.”…………………..He then got into a taxi and fled the scene. Ms Bulut later died in hospital from her injuries……….In the video footage from the cafe, Ms Bulut is seen covered with blood and screaming “I don’t want to die” as her daughter begs her to live.