#AceNewsReport – Oct.10: Wiranto who uses one name, was getting out of a car in a town square in Banten province when he was attacked: The former military chief and ex-presidential candidate, 72, suffered “two deep wounds” to his stomach but is in a stable condition……………….A police officer and two other people were injured, while two suspects, a man and a woman, were arrested…………………The minister was taken by helicopter to hospital in the capital Jakarta. He is conscious, the Banten police chief said…………..Police said the attacker had been exposed to “IS radicalism”, while State Intelligence Agency chief Budi Gunawan told reporters it was believed the suspects were part of the Jamaah Ansharut Daulah (JAD) network, which is linked to IS.

“From our preliminary investigation, the suspected attackers were exposed to radicalism since their target is a public bureaucrat and member of the police, whom they saw as enemy,” Dedi Prasetyo, Indonesian national police spokesman, told BBC Indonesia. “These professions threaten their existence.” ………….JAD has claimed to be behind some of the worst attacks in Indonesia – the world’s most populous Muslim nation – in recent years, including an attack on a church in 2018, which left 13 dead. 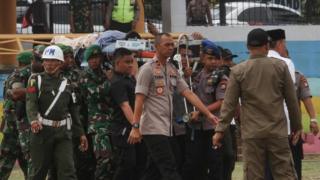 Stanis Riyanta, a Jakarta-based terrorism expert, warned the attack could build momentum for others ahead of President Joko Widodo beginning a second term next week, after he was re-elected in April “This is a warning for law enforcers that other terrorist cells could carry out attacks ahead of the 20 October inauguration,” he told the BBC

In May, at least six people were killed and 200 injured in Jakarta during mass rallies against the president : In the same month, police said Wiranto and three other officials were the targets of a failed assassination plot………………….Born the son of an impoverished teacher, Wiranto graduated from the national military academy in 1968 and rose to become head of the armed forces.

He was accused of being ultimately responsible for the deaths of more than 1,000 people in East Timor in 1999, when the province voted for independence: Denying the allegation, he said: “Indonesian security forces had an extraordinary difficult mission – I call it Mission Impossible.”

He was a presidential candidate in 2004 but came third…….