#AceNewsReport – Oct.27: Editor says heres what we know so far ……………..A lorry driver has been charged with the manslaughter of 39 people found dead inside a refrigerated trailer: Maurice Robinson, 25, was arrested after the bodies of 31 men and eight women were found in Grays on Wednesday: He is further charged with people trafficking, immigration and money laundering offences, Essex Police said: Mr Robinson, of Laurel Drive, Craigavon, Northern Ireland, is due before Chelmsford Magistrates’ Court on Monday: Three others, a man and a woman, both 38, from Warrington, Cheshire, and a 48-year-old man from Northern Ireland remain in police custody: All three were arrested on suspicion of manslaughter and conspiracy to traffic people. 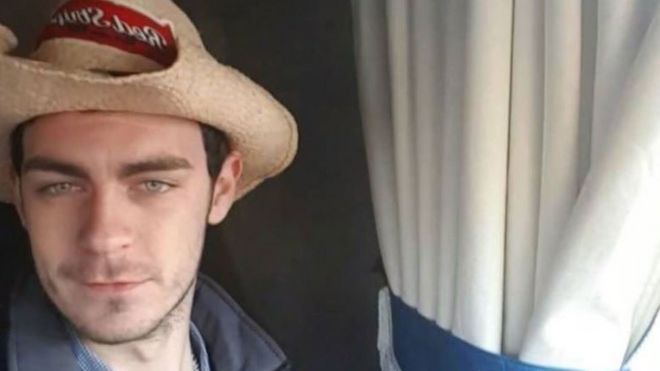 Maurice Robinson will appear before magistrates on Monday, police have said

A man in his 20s arrested by Irish police in Dublin was said to be “of interest” to the Essex Police investigation: Earlier police said efforts to identify the 39 people were focusing on the Vietnamese community. 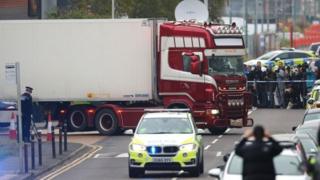 PA MediaThe bodies were discovered in the early hours of Wednesday

The victims – who police initially believed to be Chinese nationals – were inside a refrigerated trailer which came to the UK via the Belgian port of Zeebrugge: Officers said there had been a “large amount of engagement” from the Vietnamese population since the discovery of the bodies in the early hours of Wednesday……..They said all the bodies had now been removed from the trailer and post-mortem examinations were being carried out………The victims had been carrying “very few” identity documents, leaving officers to rely on fingerprints, DNA and distinguishing features such as tattoos or scars, he said.

VietHome, an organisation that represents the Vietnamese community in the UK, said it had received photos of nearly 20 people reported missing: The BBC has been contacted by Vietnamese families who fear their relatives were among the dead, including the family of Pham Thi Tra My, 26, who last messaged her family late on Tuesday………….In a text message shared by her parents, she said: “I am really, really sorry, Mum and Dad, my trip to a foreign land has failed………….”I am dying, I can’t breathe. I love you very much Mum and Dad. I am sorry, Mother.”…….Nguyen Dinh Gia believes his son, Nguyen Dinh Luong, 20, was also among the 39 victims. 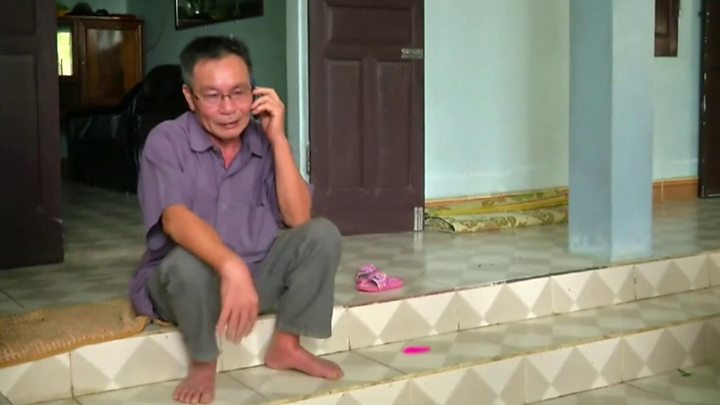 Relatives of a third man – Nguyen Dinh Tu – have also contacted the BBC saying they had not heard from him. His father, Nguyen Dinh Sat, said his son had been in debt so decided to travel abroad to seek work…………….It also emerged on Saturday that the family of a 19-year-old Vietnamese woman Bui Thi Nhung fear she may be among the dead…………….Prayers have been said for her during a service in Yen Thanh, in the northern central coast region of Vietnam………………Tran Ngoc An, the Vietnamese ambassador to the UK, visited Grays on Saturday morning with embassy officers and held meetings with Essex Police and the local council…………………The ambassador has also spoken to Home Secretary Priti Patel about the deaths………………In a statement, the embassy said there was a “willingness to exchange information and to co-ordinate” with British authorities to help identify the victims……………………It added that there had been no official confirmation of the identity of the victims.

The Vietnamese Prime Minister Nguyen Xuan Phuc said: He had asked the relevant authorities to urgently establish the identities of victims and look into the cases of Vietnamese nationals who were sent abroad illegally.