#AceNewsReport – Nov.07: The ex-Aston Villa striker, 48, was restrained by police officers at his father’s house in Telford, Shropshire, on 15 August 2016: A second police officer, also from the West Mercia Police force, has been charged with assault causing actual bodily harm: Both were bailed after appearing at Birmingham Crown Court BBC News reports. 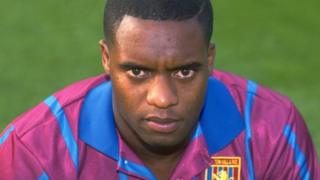 Jenny Hopkins from the CPS said: “Following the death of Dalian Atkinson in Telford on 15 August 2016, the Crown Prosecution Service has today authorised a charge of murder against a West Mercia police constable. A second police constable, from the same force, has been charged with assault causing actual bodily harm (ABH). Mr Atkinson’s family has been informed: “This decision was made following a careful review of all the evidence presented to us by the Independent Office for Police Conduct following an investigation: “Criminal proceedings against the two police officers are now active and they have a right to a fair trial. It is extremely important that there should be no reporting, commentary or sharing of information online which could in any way prejudice these proceedings.”