#AceNewsReport – Nov.07: A group of migrants have been rescued from a dinghy after being spotted by a cross-Channel ferry: The boat, which was carrying 15 Iranian men, was seen by a passenger ferry sailing to Dover at 06:32 GMT: DFDS said its ship was “tasked by Dover Coast Guard to stand by a migrant boat” until French and British authorities arrived 30 minutes later: A second dinghy is believed to have landed at Shakespeare Beach, Dover, at about 07:30. 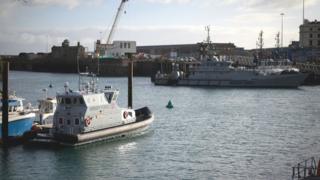 Border Force and immigration officers assisted police in a search of the beach after migrants and an abandoned small boat were spotted: Four men presenting as Iranian nationals were later found in the Aycliffe area and were being questioned by immigration officials, the Home Office said.

The Home Office said two further men found in the Crabble area of Dover later claimed they had reached the UK in a lorry: They have also been referred to immigration officials for interview.

DFDS said its ship, the Dunkerque Seaways, was “not involved in the rescue operation” of the first boat and “a French warship, two Border Force vessels, the Dover lifeboat and a coastguard helicopter” arrived within 30 minutes.

The Home Office said the 15 men were handed to immigration officials for interview after being medically assessed.