﻿ #AceNewsReport – Nov.21: Jeremy Corbyn has launched Labour’s manifesto by saying billionaires and bad bosses ‘own the Conservatives but they don’t own us’. The Labour leader made a scathing attack on ‘the establishment’ while launching what he calls the party’s ‘manifesto of hope’.Mr Corbyn announced his official plans for government today in Birmingham by targeting ‘the rich and powerful’ to fund ‘world class public services’……………….He vowed to stop utility companies’ ‘great rip off’ by bringing rail, mail, water and energy into public ownership: The leader was met with chants of ‘not for sale’ as he vowed to protect the NHS from any future post-Brexit trade deals: Mr Corbyn also set out his vision for the biggest social housing plan since the 1960s.: The party’s manifesto includes a £75 billion plan to build 150,000 new council homes, as well as a £10-an-hour minimum wage for all workers.: The spree of social house building will be paid for through borrowing, the party says.

Key Points: Of what is in the Labour manifesto?

Labour has said its manifesto would bring about ‘real change’ to overhaul Britain’s ‘rigged’ society: Mr Corbyn has already said it will include plans to provide free broadband to all homes and businesses by 2030………………..On #Brexit, Labour promises to renegotiate the deal agreed with the EU by Boris Johnson by March and then put that deal to a public vote within another three months – with Remain as an option: The second referendum would be ‘legally-binding’, Mr Corbyn said, as he confirmed plans to hold the vote within six months of coming to power: Mr Corbyn called the pledges a ‘manifesto of hope’ that were ‘fully costed’ – involving no tax increases for 95% of taxpayers:

Issuing a warning to supporters that his vision for government would be met with opposition in the weeks leading up to the 12 December poll, he said: ‘They know we mean what we say, they know we will deliver our plans, which is why they want to stop us: The leader said he ‘accepts opposition and hostility’ from the rich and powerful, billionaires, bad bosses, big polluters and dodgy landlords.

He added: ‘I accept the fierce opposition of the giant healthcare corporations because we will stop them sucking out profits out of our NHS – that is real change: ‘I accept the hostility of the privatised utilities companies because we will stop their great rip off by bringing rail, mail, water and energy into public ownership and running them for the people – that is real change.

‘And here’s a brand new one: I accept the implacable opposition of the private internet providers because we are going to give you the very fastest full-fibre broadband for free – that’s real change: ‘You can trust us to do all this because we’re opposed by the vested interests for standing up for a different kind of society: ‘These policies are fully costed with no increases in VAT or income tax or National Insurance for anyone earning less than £80,000: ‘There’s no tax increases for 95% of taxpayers. We will deliver real change for the many, not the few. That’s what this manifesto is all about.’ 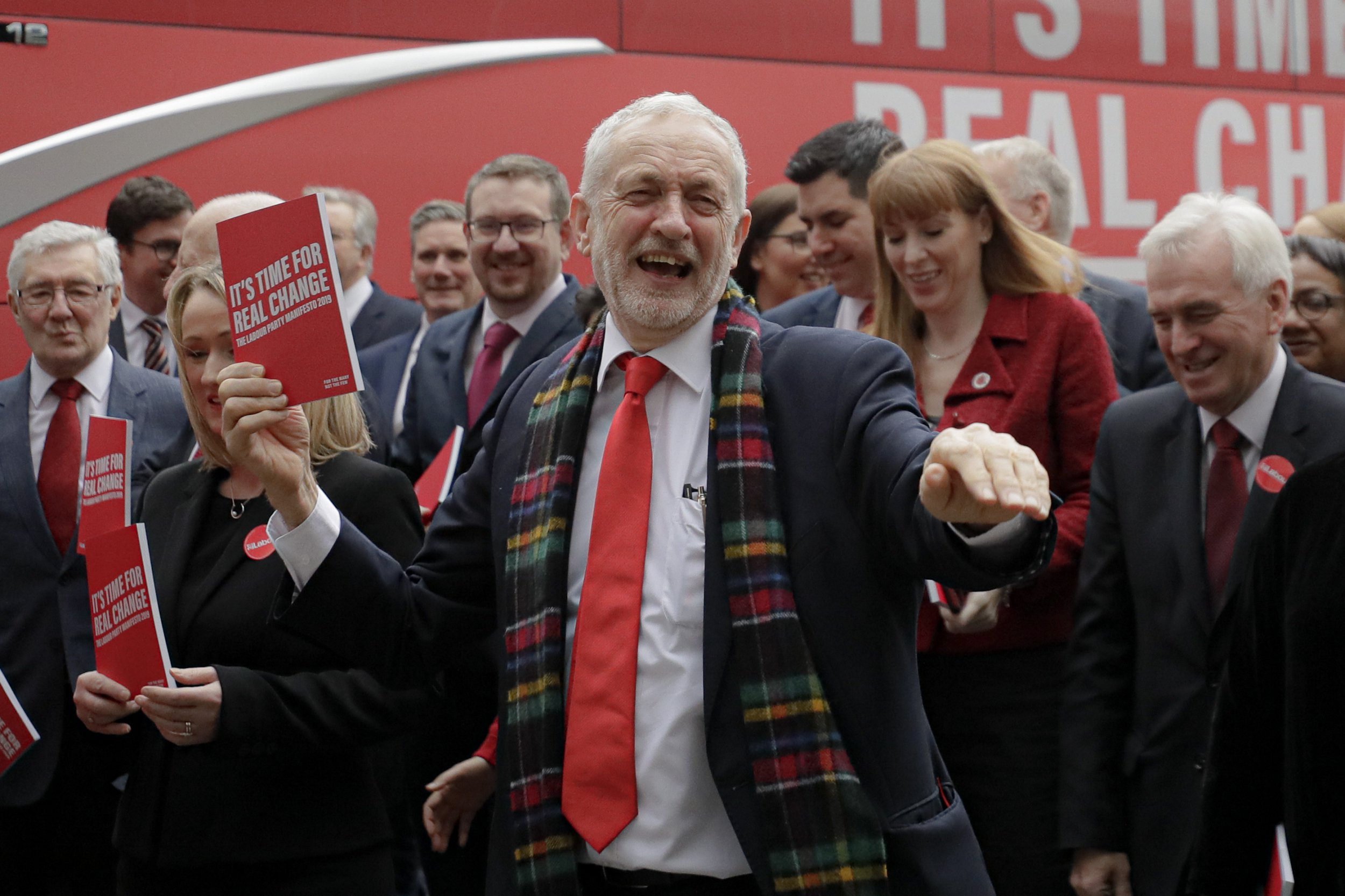 On Brexit: Labour want to renegotiate Mr Johnson’s deal with the EU before putting it back to the public in a second Brexit referendum within six months: Leader Jeremy Corbyn says the referendum would be a choice between a ‘credible’ Leave option or Remain, so could lead to cancelling Brexit: In its deal, the party says it will negotiate for the UK to remain in an EU customs union and retain a ‘close’ single market relationship with the bloc: This would allow the UK to continue trading with the EU without checks, but it would prevent it from striking its own trade deals with other countries: The Labour leader has pledged ‘to carry out whatever the people decide’ after a second vote.

On Climate Change: Labour says it will meet net-zero carbon emissions by 2030: Under its ‘green industrial revolution’ the party has pledged to create 320,000 apprenticeships within renewable industries during its first term in office: It says it will lift the ban on new onshore wind farms and invest in new solar, tidal and wind energy: It will also upgrade almost all of the UK’s 27 million homes to the highest energy efficiency standards possible, Labour says: Drivers will be offered interest-free loans on electric cars, the party has said. 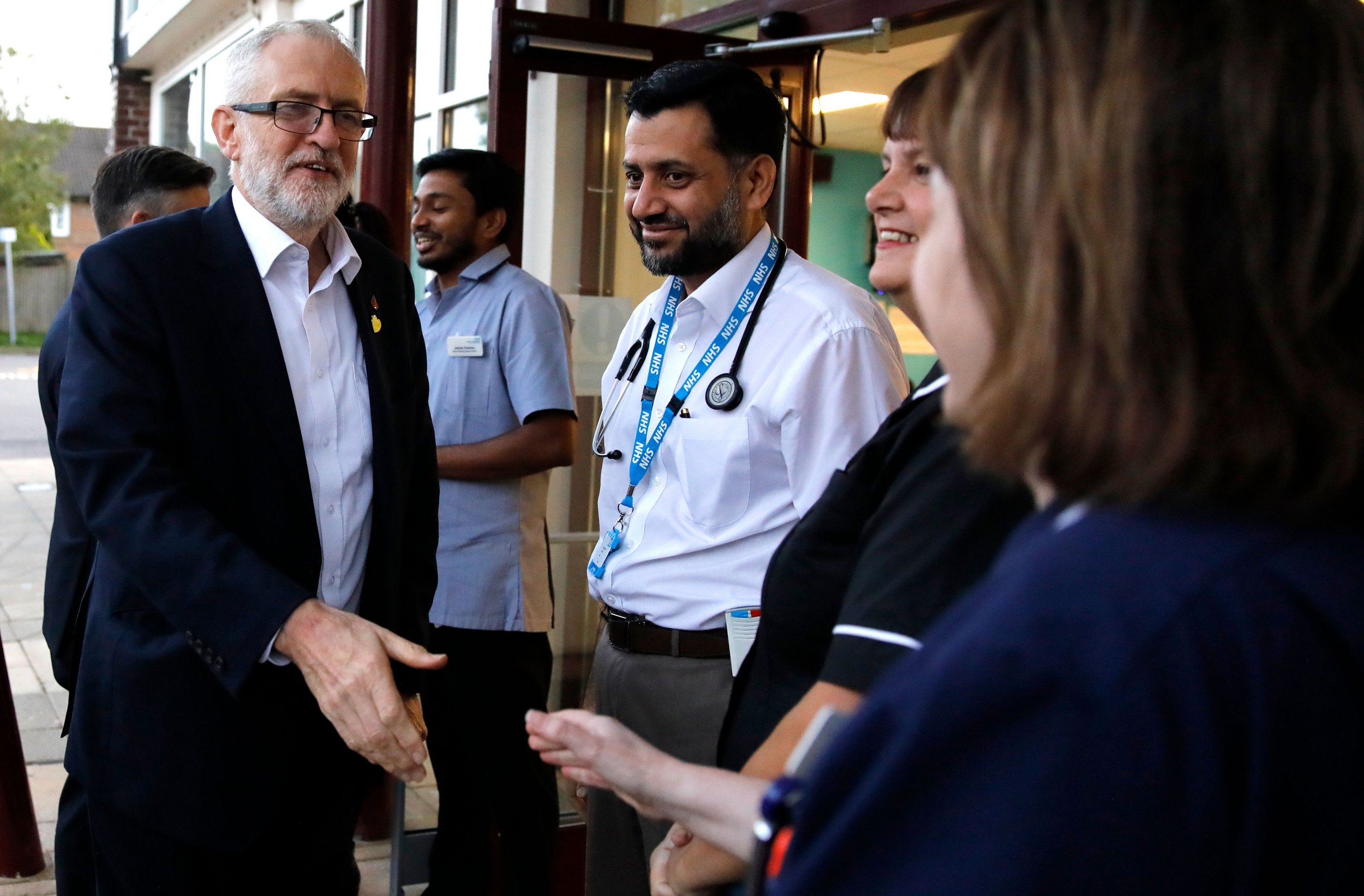 Labour has announced a plan to increase the NHS budget by £26 billion by 2024 (Picture: Getty)

On the NHS: Labour has announced a plan to increase the NHS budget by £26 billion by 2024: It will do this by increasing taxes on the richest in society, chancellor John McDonnell said: The party has said it will focus on cutting waiting times and boosting mental health services, offering free personal social care for over-65s, free prescriptions and a new state-run pharmaceutical company to make drugs available at affordable prices: It also wants to train a new generation of GPs – increase training places from 3,500 to 5,000: Labour has also said it will scrap hospital car parking charges in England:

Other key points: Labour has promised to raise the minimum wage to a ‘real’ living wage of £10-an-hour for all workers from 2020.

It has also promised to scrap Universal Credit and the so-called ‘bedroom tax’ and end the freeze on working-age benefits, as well as pledging a 32-hour working week by the end of the next decade.