#AceNewsReport – Nov.30: Yorgen Fenech, who is on police bail, also asked the court in Valetta to order the removal of Inspector Keith Arnaud, the chief investigator in the murder of Daphne Caruana Galizia: Who was the campaigning journalist who investigated and exposed corruption, was blown up by a car bomb in October 2017. The case has developed into a political crisis for the government of Prime Minister Joseph Muscat who reportedly stepped down from office on Friday: Our full report here: https://acenewsservices.com/2019/11/29/valetta-malta-latest-muscat-who-is-alleged-to-have-have-received-payments-from-panama-owned-companies-b-y-fenechs-dubai-based-17-black-firm-today-he-is-reported-to-have-travelled-to-the/

That crook Schembri was in court today, pleading that he is not a crook

Former Opposition leader Simon Busuttil testified in court this morning, as did the Prime Minister’s chief of staff, that crook Keith Schembri, in the case he himself brought against Dr Busuttil for libel damages.

Mr Schembri is claiming that he is not corrupt, despite moving to set up a secret company in Panama along with favourite minister Konrad Mizzi and Mr Egrant just days after Labour won the general election in 2013, sheltering it in a top-secret trust in New Zealand, then hunting round the world for a shady bank that would take them as clients.

(In the end they solved the problem by setting up a shady bank in Malta, hiding in plain sight.)

His government salary is just peanuts to him, Mr Schembri said, because he has retained his companies and his shares and that is where he makes his money. But the way he is using his government influence to benefit his private business in Malta is entirely a separate corruption/trading in influence issue and is not an argument in his defence.

He also said that he was unable to reply to the corruption accusations in the past two years – but it hasn’t been two years – because of a “medical condition”. Would this be the medical condition that they claimed he didn’t have, when the Prime Minister’s chief of staff disappeared for months, I wondered why, found out, and then reported on it?

There are crooks everywhere you look now. The situation is desperate. 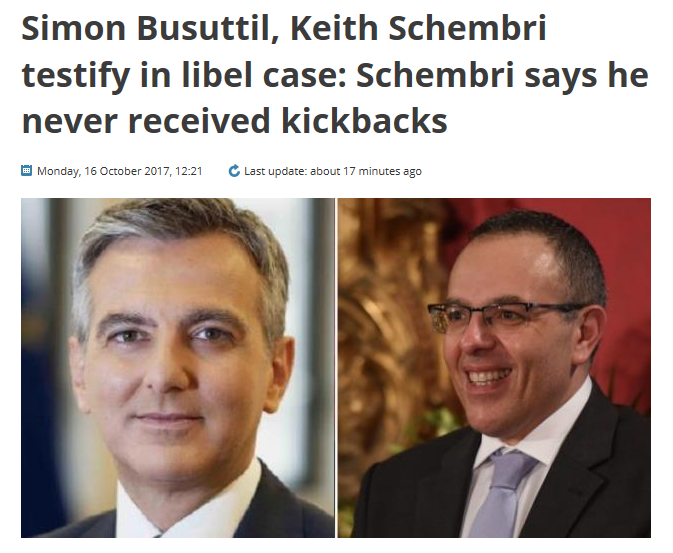 Lawyers for Fenech alleged that Schembri, who was Joseph Muscat’s chief of staff until he resigned on Tuesday, has for the last two years leaked secret details of the probe to Fenech: The lawyers told the court that audio recordings seized by police proved Fenech was privy to secret blow-by-blow details of Arnaud’s inquiries.

Shaven-headed Fenech, who is currently on police bail, appeared in court flanked by his two lawyers but with no police escort, in a grey pin-striped suit and dark glasses, looking exhausted but calm: Fenechs lawyer Marion Camillieri said the recording were recovered from Melvin Theuma: He was granted an official pardon this week in return for testifying that he acted as the middleman in passing a contract to three people already indicted for planting the bomb that killed Caruana Galizia.

Camillieri told the court the evidence, which included a photo of Theuma in Schembri’s office, proved his involvement, despite the fact that Schembri was released on Thursday evening by police after being held since Tuesday morning: “We are saying that although there is a lot of evidence against Keith Schembri…we have a recordings, a contract. And yet it was declared that he is no longer a person of interest,” she said.

Camilieri said Inspector Arnaud was an associate of Schembri who had briefed him constantly on the case: She said Schembri organised a job for Arnaud’s wife, an accusation denied by the Maltese government and police: “How can justice be done by Yorgen Fenech when we know that this person had a close relationship with the person investigating,” Camillieri said.

Responding for the government, Victoria Buttigieg said it would be damaging to suspect Arnaud who “knows the case inside out” His wife got no favours from Schembri and a suspect cannot dictate how an investigation is carried out. Buttigieg said……….“The dynamics of investigation are at the absolute discretion of the police,” she said.

No country allowed a suspect to choose who investigated the case: She denied Arnaud’s wife had been handpicked for a government job.

Reporters were excluded from part of the government’s case to avoid disclosure of further sensitive details: