#AceNewsReport – Dec.02: A fierce winter storm is hampering attempts by investigators to reach the site in South Dakota where a single-engine plane crashed, killing nine people and injuring three others: The Pilatus PC-12 plane was bound for Idaho Falls, Idaho, and crashed just a mile after takeoff on Saturday: It is hoped investigators, currently stuck at Sioux Falls some 140 miles away, will reach the site by Monday.

The victims have not yet been named, but local news reports say the party included well-known local executives on a hunting trip, and the ages of those killed range from 7 to 81: The three survivors are aged 28, 27 and 17. Emergency services said a “combination of several weather factors” almost certainly contributed to the tragedy.

Some 50 million homes are under some form of winter weather alert as winter #StormEzekiel continues moving across the country: It has caused several deaths, including those of a boy and a girl, both aged five, who were found in central Arizona after their truck was swept away on Friday while crossing a swollen creek. 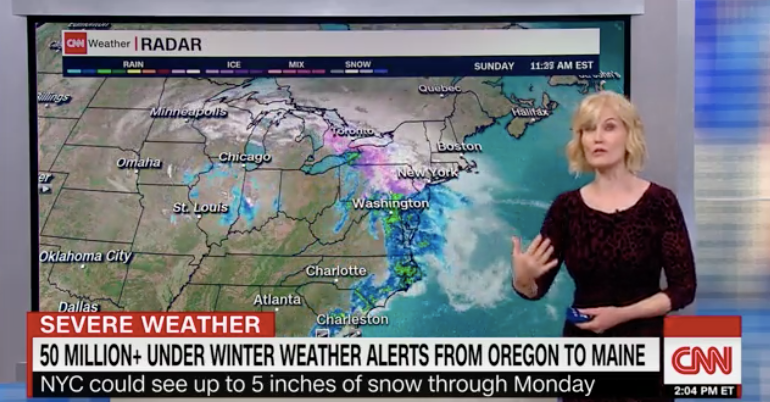 Two adults and four other children were rescued by helicopter, but a six-year-old girl is still missing: Two boys, aged five and eight, died on Saturday in Missouri when the vehicle they were riding in was swept off flooded roads.

A 48-year-old man died in a separate incident in the state, and a storm-related death was also reported in South Dakota: The storm has been pounding the Midwest and is now shifting over to the Northeast. By early Sunday evening, New York City was being lashed with sleet.

Newark, New Jersey has had 33 flight cancellations and some inbound planes are being delayed by an average of more than two hours because of the weather: There were also dozens of flight delays in Chicago and Minneapolis. In Denver, 100 Flights were cancelled Saturday because of high winds.

Meanwhile a West Coast storm is causing downpours everywhere from Seattle down to Los Angeles, with snowfall at upper levels: In some areas of the state, travel is being highly discouraged by officials.

#AceNewsDesk reports ………..Published: Dec.02: 2019: Dave Maclean for The Independent and agencies contributed to this report