The CPS said that the killing was linked to a previous incident in April when the defendants’ younger brother was stabbed in Toxteth: Paramedics called to the scene took Mr Lloyd-Evans to the Royal Liverpool University Hospital after the attack but he died later from his injuries: Police officers chased the two men as they made off after the attack: Edwards was seen throwing away the knife in nearby Cornwallis Street…………………The knife was recovered and contained traces of DNA from Mr Lloyd-Evans: Edwards was arrested immediately on Cornwallis Street and Perry was arrested shortly afterwards at the Royal Liverpool University Hospital.

Neither of them ever admitted their guilt CPS reported: Today, 3 December 2019, at Liverpool Crown Court, a jury convicted Edwards of murder and possessing a knife and Perry of manslaughter…………………Perry was acquitted of murder. The two men will be sentenced on 17 December 2019: 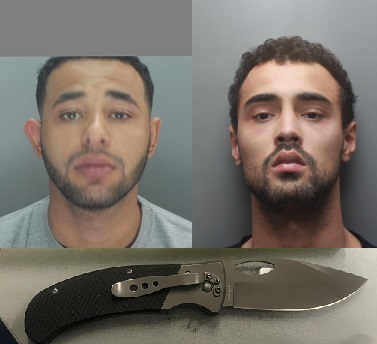 Edwards (left), Perry and a knife of the type used
to murder Mr Lloyd-Evans

Keith Drummond is a District Crown Prosecutor in the Crown Court Unit of CPS Mersey-Cheshire said: As the city of Liverpool was being painted red by Liverpool FC fans, these two defendants mercilessly took away the life of a man within a matter of seconds: “The Crown Prosecution Service said these men worked together in this tragedy. Edwards may have been the one to plunge the knife into Mr Lloyd-Evans’ chest, but Perry restrained him while the knife went in………..“The jury acquitted Perry of murder but agreed that he had played a key part in Mr Lloyd Evans’s death and convicted him of manslaughter, so both men have been found guilty of some of the most serious crimes in the criminal justice system. Knife crime has brought tragedy to our streets yet again and our thoughts remain with the family of Mr Lloyd-Evans at this difficult time.”