#AceNewsReport – Dec.06: A man has pleaded guilty to the attempted murder of a child: Jonty Bravery, 18 (02.10.01), of Ealing, entered his plea at the Old Bailey on Friday, 6 December: Bravery was charged after he threw a six-year-old boy from a viewing platform of a gallery earlier this year: An investigation was launched after police were called at around 14:40hrs on Sunday, 4 August, to reports of a young boy thrown from the tenth floor viewing platform of the Tate Modern in Bankside, SE1: Officers attended along with colleagues from London Ambulance Service and London’s Air Ambulance: The boy was found on a fifth floor roof and treated at the scene before he was taken to hospital by London’s Air Ambulance. 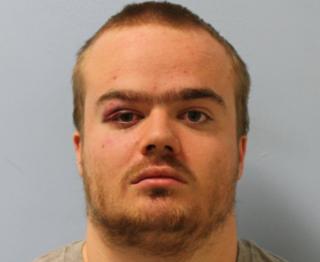 Met PoliceJonty Bravery was 17 years old when he was charged

BBC News: After his arrest he told police he planned in advance to hurt someone at the South Bank gallery, to highlight his autism treatment on TV: The court heard Bravery had approached a member of Tate Modern staff, saying: “I think I’ve murdered someone, I’ve just thrown someone off the balcony.” In his police interview, Bravery said he had to prove a point “to every idiot” who said he had no mental health problems, asking police if it was going to be on the news.……“I wanted to be on the news, who I am and why I did it, so when it is official no-one can say anything else.”……….The court heard Bravery, who has autistic spectrum disorder, obsessive compulsive disorder and was likely to have a personality disorder, had been held at Broadmoor Hospital since mid-October: In social media posts, now deleted, the defendant’s father, Piers Bravery attempted to raise awareness of autism and its treatment.

He spent a number of weeks in hospital, before he was able to return to France with his family on Monday, 16 September, where he continues to receive treatment in hospital: While no specific prognosis can be established at this point, the child is showing signs of improvement in his communication and movement, but continues to face a long rehabilitative process following what were extremely serious injuries.

Bravery, who was 17 at the time of the incident but can now be named, appeared before Bromley Youth Court on Tuesday, 6 August charged with attempted murder: He was remanded in custody to appear at the Old Bailey for a pre-trial preparation hearing on Thursday, 7 November: A trial was set for February but today, he pleaded guilty to the charge.

Detective Chief Inspector John Massey, said: “This was an incredibly unusual and traumatic event and I can only imagine the horror the victim’s family felt as they realised what had happened to their child: “The motive behind Jonty Bravery’s actions remains unclear. However, what is clear is the damage that has been done to this family, who have remained courageous and dignified in the face of such trauma, in addition to widespread media coverage of the incident: “Members of the public and security staff acted swiftly to immediately detain the defendant prior to the arrival of police and I would like to thank them and those who came forward with witness accounts……………………“Following today’s plea and conclusion of this case, the victim’s family have been spared the trauma of a trial and can now focus on their son’s care and rehabilitation.”

The family of the injured child provided the following statement: “Our son still needs intensive rehabilitation since he hasn’t recovered mobility in all limbs or cognitive capacities: He is constantly awoken by pain and he can’t communicate that pain or call out to hospital staff……………….“Life stopped for us four months ago. We don’t know when, or even if, we will be able to return to work, or return to our home, which is not adapted for a wheelchair………………“We are exhausted, we don’t know where this all leads, but we go on…………..“We wish to thank all of the people, family and friends who have supported us throughout this horrific experience.”