#AceNewsReport – Dec.09: Darren Sexton, 42, From Westcliff-on-Sea, was stopped at the wheel of his van by officers from the National Crime Agency’s Armed Operations Unit on the morning of 6 June 2019: He had earlier been watched by investigators as he carried a Lonsdale-branded cabin bag from the vehicle into a house on West Road: The bag was found in the loft of the address during a search by officers from the Organised Crime Partnership – a joint NCA and Metropolitan Police unit: It contained a 9mm Smith and Wesson self-loading pistol and 77 rounds of compatible ammunition: Darren Sexton was charged with multiple offences, and on 9 August 2018 pleaded guilty to three counts of possessing a prohibited firearm, and one count of possessing ammunition. 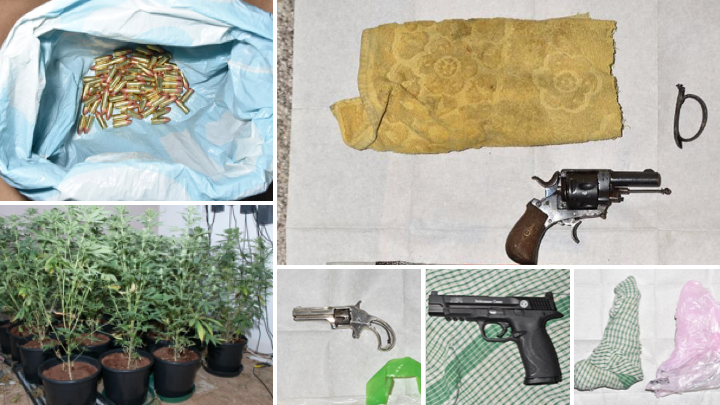 Also in the bag were two vintage pocket revolvers – one a Bulldog centrefire weapon and the other a rimfire variety:

He was sentenced today at Chelmsford Crown Court: Nicholas Sexton, Darren’s cousin, was also travelling in the van when it was stopped. Officers subsequently searched his home in Long Road, Canvey Island, and seized commercial quantities of cannabis plants, as well as hydroponics equipment: Both Nicholas and Darren Sexton were charged with producing a controlled drug, and pleaded guilty to that offence on 9 August: Nicholas Sexton was sentenced today to nine month’s imprisonment.

Matt McMillan, Operations Manager at the Organised Crime Partnership, said: “These guns and ammunition were lethal weapons which could have destroyed countless lives if used on the streets of the south east: “ Targeting the trade in illegal firearms is a priority for the NCA and Metropolitan Police, and we work relentlessly to help ensure people can feel safe in their communities.”…………….“Members of the public can provide vital assistance in tackling gun crime. We ask anyone who feels they may have information on firearms access, use or supply to report it to their local police force, or anonymously via Crimestoppers.”