#AceNewsReport – Dec.10: Editor says that its not what someone says that people should listen too but what they do not say …as those that speak with a ‘ forked tongue ‘ has nothing but bad intent in their heart ….but those that speak the truth will inherit the earth. Amen

Local Media Reports: The main political party leaders are continuing to push their election pledges to voters, as the campaign enters its final few day: Conservative leader Boris Johnson says in an open letter that Thursday’s poll is “historic” and a choice to “move forwards” after #Brexit: Labour leader Jeremy Corbyn said it was a “chance to vote for hope” and he had “the most ambitious plan to transform our country in decades”.

The UK goes to the polls on Thursday: Ahead of this, the candidates are travelling around the country in a bid to spread their election messages: Among the manifesto pledges being highlighted by the main UK parties on Sunday are: ﻿ 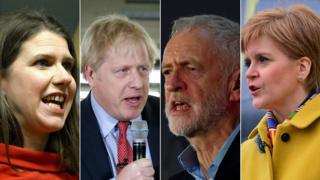 Meanwhile, SNP leader Nicola Sturgeon is warning that “the very future of Scotland” is at stake in the election.

She is appealing to voters to back her party “to escape Brexit, protect the NHS, and to put Scotland’s future in Scotland’s hands”.

And Liberal Democrat leader Jo Swinson told Sky News her party was looking to make “real progress” by increasing its number of MPs on Thursday: She added: “We will be absolutely working to stop Brexit, doing so in a co-operative way with others who share our values and share that goal.”

In his letter to voters published in the Mail on Sunday, Mr Johnson says the election will be one that “shapes future decades”, urging voters to create a “working Conservative majority government that will get Brexit done, end the uncertainty and allow Britain to move on”