#AceNewsReport – Dec.20: Some areas in the UK have had more than 50mm of rain in a day and a half. The village of Cardinham in Cornwall had 52mm of rain in 36 hours, while an area further inland, outside Launceston, got 53.4mm. Libanus in the Breacon Beacons, south Wales, had 43mm: Guardian News reports 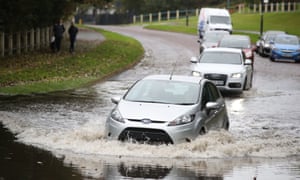 All northbound trains from Brighton have been cancelled due to flooding in the Balcombe area, rail staff confirmed: Victoria Express trains and Thameslink services were halted and announcements at Brighton station were “strongly advising” commuters to cancel trips into London on Friday.

Passengers trying to reach Gatwick airport are having to take a circuitous route by taking the Southampton train as far as Barnham and wait for a connecting train to the airport:

Commuters were also advised there was only a limited bus replacement service and the earliest they could expect to reach London was about 1pm: Southern Rail said persistent rainfall had caused water levels to reach the height of the rail tracks in places.

“Alternative routes to reach your destination are limited, so you should make your own way to your destination,” its website said. “Please be mindful that roads will also be suffering from the increased rainfall.”

“ Network Rail maintenance teams have been dispatched to assess the situation and take appropriate action. “There is flooding in Balcombe tunnel between Three Bridges and Balcombe,” the company tweeted. “This means the up line to London is currently blocked.”

With #rain warnings in force across parts of the UK for Friday morning’s rush hour, take care on the roads and stay #WeatherAware pic.twitter.com/hdCeqEfzzT

UK weather warnings – Met Office – https://www.metoffice.gov.uk/weather/warnings-and-advice/uk-warnings#?date=2019-12-20 and that flooding has also affected swaths of southern England and the Midlands, with 45 flood warnings and 192 alerts put in place by the Environment Agency: Yellow warnings for rain were likely to remain across many parts of the south until midday on Sunday. However, forecasters predicted conditions in Cornwall would improve.

“There will be some showers around but nowhere near as much rain as today,” a spokesman for the Met Office said: “More rain is coming from the south through the night and tomorrow.

“Most of the rain will be in eastern England and Scotland, gradually improving throughout the day. It does look, as we head into next week, that the weather will turn drier.”

Elsewhere, sunny spells and scattered showers were expected on Friday, some of which could be heavy and thundery:

The temporary barriers will stay up in Bradford-on-Avon until Monday and the foul weather has passed through. Our ongoing thanks to @BoATCCEVs for their support and intel. pic.twitter.com/nUjapWU4pc

Norfolk and Suffolk police said parts of both counties had been inundated on Friday morning. Norfolk police tweeted: “Various reports from our teams out this morning of standing water on the roads around the county. Please drive with caution on your morning journeys.”

Suffolk police instructed motorists to reduce their speed when necessary: “We are getting reports of standing water on main carriageways throughout the county,” it tweeted.

The Environment Agency advised against driving through flood water: “Heavy showers could bring disruption to communities in parts of southern and central England as rain falls on already wet ground,” it added.

Heavy rain ahead of Christmas week …

It’s going to turn less cold and more unsettled this week as a low-pressure system moves across the UK, bringing spells of wet and windy weather to many: The Met Office has issued several warnings for strong winds and heavy rain through the rest of this week, in what is expected be one of the busiest travel periods ahead of Christmas: https://www.metoffice.gov.uk/about-us/press-office/news/weather-and-climate/2019/rain-before-christmas