#AceNewsReport – Dec.26: At least 15 suspected migrants have been brought into the port of Dover by Border Force Officials, Sky News can reveal: It comes after a coordinated search and rescue was carried out into a number of incidents off Kent, in a joint operation by HM Coastguard and Border Force: Sky saw two boats arrive at the south coast port, one carrying six suspected migrants and the other nine: The first arrived at about 6.20am and the other soon after dawn: It is believed there may have been more boats intercepted: The migrants were brought to shore with their heads covered, many wrapped in grey blankets and at least one in orange emergency clothing: Most appeared to be male.﻿

At least 15 migrants brought ashore at Dover by Border Force 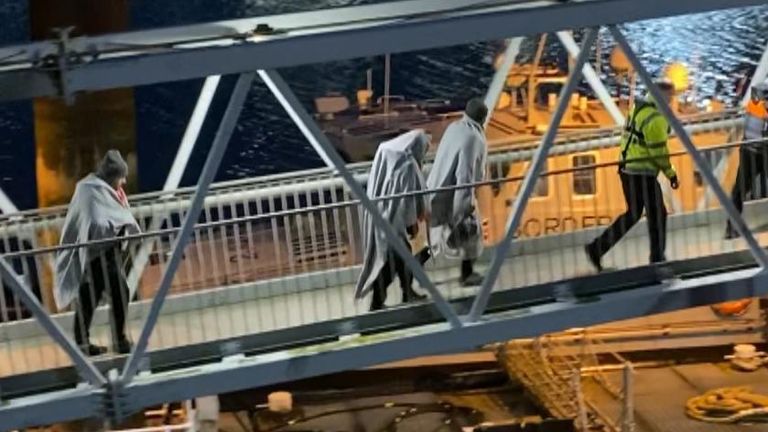 A number of suspected migrants believed to be in double figures were brought on to land in the early hours.

Sky reporter Kit Bradshaw, who witnessed the migrants being brought ashore, said: “They were brought up that gangway, they were spoken to by Border Force officials, they were photographed, many of them were wearing blankets, many of them had life jackets on, which were taken off by those officials when they got to the top of that gangway and put in a pile to one side, and they were led to (a) shipping container where they were given hot drinks and blankets”

A Coastguard statement said: “We sent Dover RNLI lifeboat, HM Coastguard’s helicopter from Lydd as well as the fixed-wing aircraft and Border Force vessels Seeker and Speedwell: “We are committed to safeguarding life around the seas and coastal areas of this country. HM Coastguard is only concerned with preservation of life, rescuing those in trouble and bringing them safely back to shore, where they will be handed over to the relevant partner emergency services or authorities.”

More follows…….soon check back for updates