#AceNewsReport – Dec.28: The Serbian Orthodox Church says the law could strip the church of its property, including medieval monasteries and churches…………………Pro-Serb lawmakers in Montenegro’s parliament were arrested on Friday after they attempted to block the vote Euronews reports. 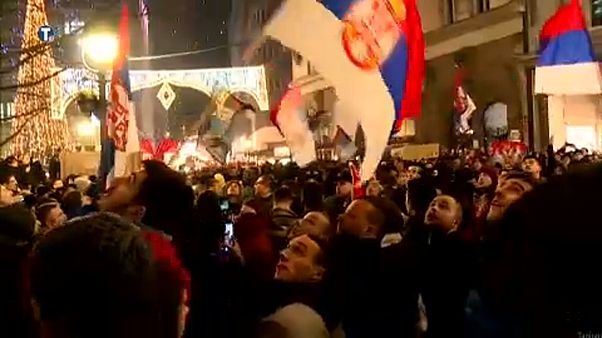 They hurled what appeared to be a tear gas canister or a firecracker and also tried to destroy microphones in the parliament: Plainclothes police officers wearing gas masks intervened, detaining 22 people, including 17 opposition lawmakers……….”That has never been seen in democracy and in parliament that Serbian lawmakers during the parliament session are brutally arrested,” one of the protesters, Nemanja Vuckovic, said.

All but three of the lawmakers were released: The three are suspected of attacking the speaker of the parliament speaker and preventing him from performing his job, police said.

Two of the arrested lawmakers, Andrija Mandic and Ivan Knezevic, were sentenced in May to five years in prison for taking part in an alleged Russian-orchestrated coup attempt in 2016 against Montenegro’s then-prime minister and current pro-Western president, Milo Djukanovic. They were freed pending an appeal.

“``We are ready to die for our church, and that’s what we are demonstrating tonight,” Mandic said during the tumultuous Parliament session.

The law, approved by 45 ruling coalition lawmakers, says religious communities with property need to produce evidence of ownership from before 1918, when Montenegro joined a Serb-led Balkan kingdom and lost its independence: In neighbouring Serbia, President Aleksandar Vucic said he was concerned but hoped that tensions will ease and "our church's holy sites will be preserved.”

Vucic promised to help the Serbian church in Montenegro "without burning bridges.”

The Serbian Orthodox Church in Montenegro described the law as “”discriminatory and unconstitutional.” Patriarch Irinej, the head of the church, said Montenegrin authorities “must immediately stop with the brutal terror against the church, its priests and followers.“”

Montenegrins remain divided over whether the small Adriatic state should foster close ties with Serbia: About 30% of Montenegro’s population identify as Serbs and were mostly against the split from Serbia.