#AceNewsReport – Jan.06: Detectives are appealing for information and witnesses following a fatal stabbing in the Finsbury Park area of Islington: Police were called at approximately 18:50hrs on Friday, 3 January, to reports of a man stabbed in Lennox Road, near Charteris Road, Finsbury Park: Officers and London Ambulance Service attended the scene, where the victim – a 30-year-old man – was pronounced dead at 19:42hrs. A post-mortem examination will be arranged in due course: The man’s next of kin have been informed, but officers await formal identification. It is understood the victim worked as a delivery rider for both Uber Eats and Deliveroo…..A murder investigation has been launched, led by Detective Chief Inspector Neil John.

A manhunt is under way for a van driver over the fatal stabbing of a food delivery rider in an apparent road rage attack in London: Motorcyclist Takieddine Boudhane, 30, who worked for UberEats and Deliveroo, died at the scene in Finsbury Park following what police describe as a “traffic altercation” on Friday evening: A white VW Caddy panel type van was found in Islington on Sunday and taken to a police compound where it will be forensically examined. 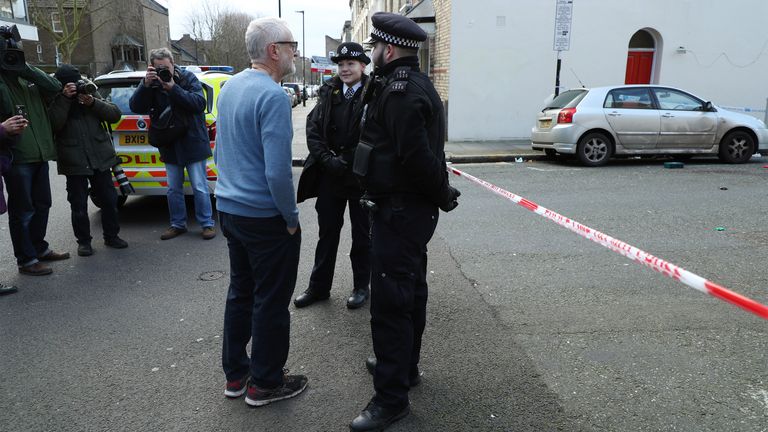 The killing of Mr Boudhane, an Algerian national who had been living in the UK for about three years, sparked the Metropolitan Police’s first murder investigation of the year Sky News reports.

DCI John said: “The investigation is at a very early stage. It would appear at this time that an altercation has taken place between the victim, who was riding a motorcycle, and the driver of another vehicle in the vicinity of Lennox Road and Charteris Road, Finsbury Park: “This took place at approximately 6.50pm on Friday night in a busy thoroughfare where there are likely to have been many members of the public present: “The incident itself appears at this early stage to have been spontaneous and not connected to, or as a result of, anything other than a traffic altercation: “Specialist officers are working extremely hard to build a clear picture of what happened and I would encourage anyone who may have seen the incident or has information to come forward: “A forensic examination of the scene has been undertaken and I expect the road to reopen very soon.”

Any witnesses or anyone with information is asked to contact police on 101 or tweet @MetCC and quote CAD5934/3Jan.