#AceNewsReport – Jan.07: The seven-month-old boy, who was in a buggy at the time, was exposed to temperatures of -7C for five hours in the far-eastern Khabarovsk region: He was placed on the balcony to sleep in the fresh air, local media report.

The region’s health ministry later advised people not to leave young children outside unattended: “Always know where and with whom [your child] is,” the ministry said in an Instagram post……………….”Do not pass by if another child is in danger – in winter a child who is lost or injured on the street can very quickly become a victim of low temperatures,” it added…………….It also stated that children in Khabarovsk were increasingly becoming victims of parental “ignorance” and negligence of what it described as basic safety measures. 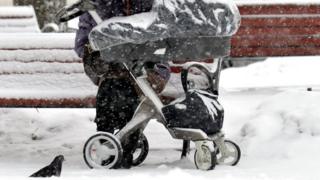 According to Russian news site Lenta, a preliminary report into the child’s death in the town of Nikolayevsk-on-Amur suggested that it was the result of hypothermia: Hypothermia occurs when the body’s core temperature is lowered due to exposure to cold, and can happen even with mild temperatures if exposure is prolonged………The elderly and babies under one year old are most at risk among people with no other health issues…………….Taking young children outdoors to sleep is not uncommon in countries with colder climates……….The theory behind outdoor napping is that exposing children to fresh air, even during the winter, can help avoid coughs and colds.

Parents in Nordic countries such as Finland and Norway also believe their children sleep better and for longer in the open.