#AceNewsReport – Jan.11: French Prime Minister Edouard Philippe has offered a concession to unions in a bid to end nationwide strikes against proposed pension reforms: In a letter, Mr Philippe said he was willing to withdraw a proposal which would raise the age at which workers can claim their pension from 62 to 64……….One of France’s largest unions, the CFDT, welcomed the announcement saying it showed a willingness to compromise.

However, the CGT union called the proposal “a smokescreen”………..In a statement it said it was “more determined than ever” to stop the reforms……Industrial action against President Emmanuel Macron’s planned pension reform is in its 38th day and has badly disrupted France’s transport system – particularly trains.

Protesters again took to the streets of Paris and other cities on Saturday: In the capital, police fired tear gas at some groups of protesters who smashed windows and set light to rubbish bins and billboards.

Mr Philippe’s announcement followed talks between ministers and union leaders on Friday: The government says the reforms are necessary to make the system fairer and more sustainable, but unions say workers will lose out………………..”To demonstrate my confidence in the social partners… I am willing to withdraw from the bill the short-term measure I had proposed” to set a so-called “pivot age” of 64 with effect from 2027, he wrote in his letter to the union leaders.

President Macron described it as “a constructive compromise” Laurent Berger, secretary general of the CFDT, hailed the government’s concession as “a victory” for the union……….Writing on Twitter, he said it marked “the government’s willingness to compromise”…………….”We obtained the withdrawal of the pivotal age, a victory for the CFDT! We will now continue our action for a fairer and more united retirement system,” he said.

However, the CGT said it would continue to demand “the withdrawal” of the pension reforms: It called on people “to participate massively in strikes and demonstrations planned for next week”

French politician and former Socialist Party presidential candidate Ségolène Royal said it was “better late than never”.“I hope that it will allow the resumption of serious discussions. It’s a first step, it will take many more,” she said, according to Le Figaro newspaper.

What is the strike about?

Workers are striking over Mr Macron’s plans to replace France’s 42 separate pension regimes with a universal points-based system: Unions representing millions of staff in both the public and private sectors warn the plan will remove the most advantageous pensions for a number of jobs and force people to work longer or face reduced payouts when they retire. 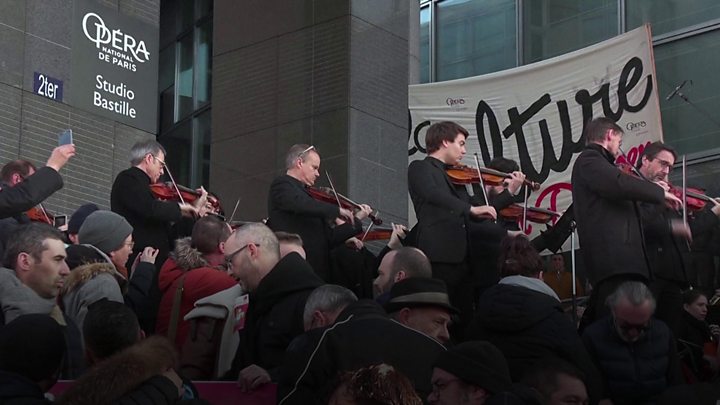 France raised the official retirement age in the past decade from 60 to 62, but it remains one of the lowest among rich countries – in the UK, for example, the retirement age for state pensions is 66 and is due to rise to at least 67: In November, a report commissioned by Mr Philippe concluded that, under the existing system, the country’s pension deficit could be as high as €17.2bn by 2025.