#AceNewsReport – Jan.15: A large metal plate launched by an explosion at a chemical plant in Spain’s autonomous Catalonia region killed a man 3km (two miles) away: The man, named only as Sergio, was in his apartment when the one tonne object struck, causing part of the building to collapse, officials have confirmed: 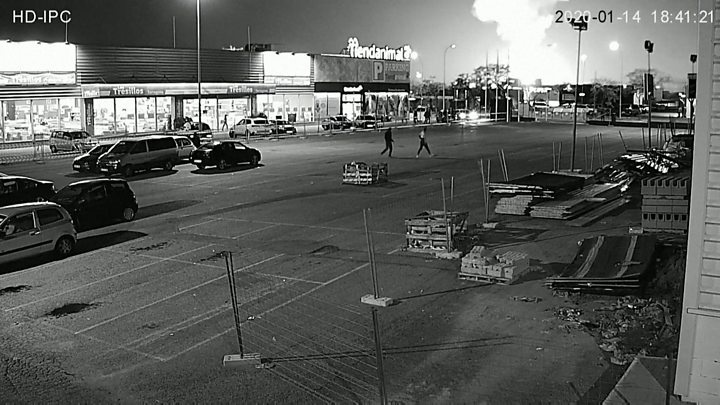 A senior member of staff at the factory was also killed in the explosion, which seriously injured two others: Tuesday’s blast occurred at about 18:40 local time (17:40 GMT) in La Canonja: Authorities said it was probably caused by a chemical accident, but that no toxic substances were released. 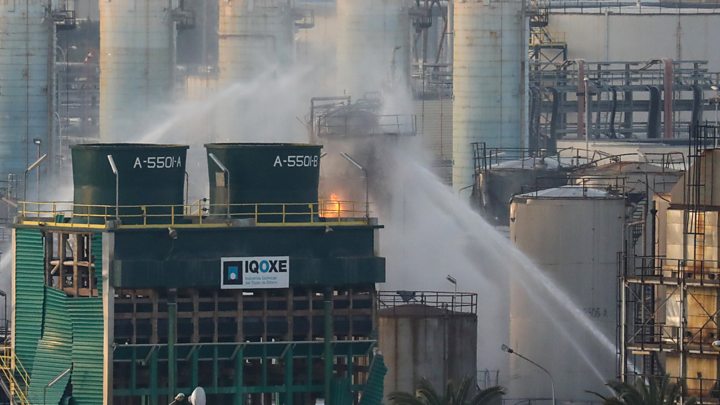 A large explosion at the chemical factory caused a massive blaze

People were, however, initially urged to stay indoors when the explosion at the site just south of Tarragona set off a huge fire: Residents of the Plaça García Lorca housing estate in nearby Torreforta, where Sergio was killed, described seeing “a ball of fire” stream across the sky at the time of the incident: Firefighters later confirmed that this was a metal plate from the factory site, which they said weighed about a tonne:

Dozens of firefighters worked through the night and into Wednesday to tackle the blaze at the Industrias Químicas del Óxido de Etileno plant: A reporter for Spanish public broadcaster RTVE, Jesús Navarro, tweeted an image showing a mangled structure at the factory site.

Water was sprayed over tanks containing chemicals to keep them cool: The factory produces chemicals such as ethylene oxide – which can be used to make antifreeze, pesticides and to sterilise hospital equipment – and propylene oxide, which is used to make plastics. Both are extremely flammable.

Rescue teams with search dogs found the body of the second victim, a senior staff member at the factory, in the early hours of Wednesday: The search had been called off overnight due to poor visibility and dangerous conditions………..At least two people are reported to have suffered serious burns, Catalonia’s civil protection service said.

Late on Tuesday Catalan leader Quim Torra told reporters: “Now we can send a message of calm and confidence to people. There is no toxicity and therefore people can carry on with their lives as normal.” Spanish Prime Minister Pedro Sánchez later offered support to Catalan authorities in dealing with the accident.