#AceNewsReport – Jan.23: Germany has banned the neo-Nazi group Combat 18 and launched raids across the country in an attempt to crack down on the organisation, officials say: “Right-wing extremism and anti-Semitism have no place in our society”, Germany’s interior ministry said BBC News reports 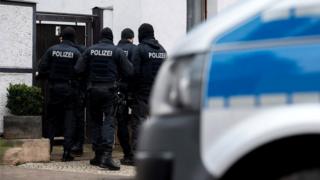 Combat 18 takes its name from the Nazi dictator Adolf Hitler’s initials, referencing the first and eighth letters of the alphabet: The group originated in the UK in the 1990s but spread to other countries.

On Thursday, more than 200 police officers searched several properties belonging to leading members across six German states, Interior Minister Horst Seehofer said in a statement: According to the ministry the decision was made following the murder last June of pro-migrant German politician Walter Lübcke, and the deadly attack months later on a synagogue in the eastern city of Halle.

” The hideous murder of district president Dr Walter Lübcke and… the terrorist act in Halle last year have shown us, brutally, that right-wing extremism and anti-Semitism are a significant danger to our free society,” the minister said: Items recovered during the raids, which took place in the early hours of Thursday, included mobile phones, laptops, clothing, Nazi memorabilia and propaganda materials, the statement added: The ministry added that, separate to the incidents mentioned by Mr Seehofer, the purpose of Combat 18 and its activities contravened Germany’s constitutional law and order “

Neo-Nazi groups are already outlawed in many European countries: Last February, French President Emmanuel Macron said his government would act to dissolve Combat 18 and other extreme-right groups, which he said had fuelled hatred and promoted discrimination………….The move followed a series of high-profile anti-Semitic attacks in France……………………The crackdown in Germany comes on the day that world leaders meet in Jerusalem to mark the 75th of the liberation of the Auschwitz Death Camp in Nazi-occupied Poland.