﻿#AceNewsReport – Jan.23: The deeply researched timeline, provided exclusively in advance to Breitbart News, details all of the evidence of federal law enforcement officers, intelligence agencies, and government bureaucrats trying to cripple President Trump’s political campaign and his administration and continues to highlight the present-day efforts by Democrats and their impeachment effort. 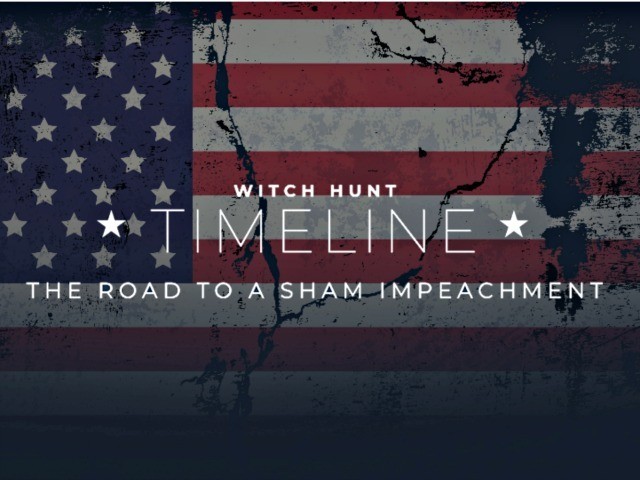 “Their perverse scheme took the instruments of government designed to protect American democracy and used them to undermine it,” wrote PAC officials in a forthcoming release: They added, it “follows the genesis and development of the deep state’s Witch Hunt against President Donald J. Trump, a monstrous conspiracy against the American people and the American system of government.”

Beginning with the FBI’s actions against Carter Page and George Papadopoulos in 2016, the timeline highlights efforts by the Hillary Clinton campaign to obtain the phony dossier from Fusion GPS: The timeline continues with the currently well-known efforts by FBI Director James Comey and other officials to launch the operation “Crossfire Hurricane” to surveil members of Trump’s campaign……………Each point in the timeline is well documented with stories in the media and from the reports from the Justice Department Inspector General.

“ After Trump won the 2016 election, the timeline details the efforts of the Obama administration and the media to direct attention to the dossier that was featured in CNN reporting before it was ultimately released in full by Buzzfeed “

It then focuses on details surrounding the investigation and the final report from Special Counsel Robert Mueller:

In 2019, ……the timeline notes the attempts by Democrats to leak false details about President Trump’s phone call with Ukranian President Volodymyr Zelensky until Trump ultimately released the transcript of the call in September.

The timeline concludes with the Democrat vote to impeach the president, dragging the Senate impeachment trial into January 2020. ………American First Action is the official Pro-Trump Super PAC dedicated to electing federal candidates who support the agenda of President Donald Trump.