#AceNewsReport – Jan.31: Prime Minister Boris Johnson will hail the “dawn of a new era” later, as the UK prepares to leave the European Union after 47 years: In a video message to be shown at 22:00 GMT – an hour before the official departure time – he will say Brexit is “not an end but a beginning”………….He will describe severing ties with the other 27 EU nations as “a moment of real national renewal and change” 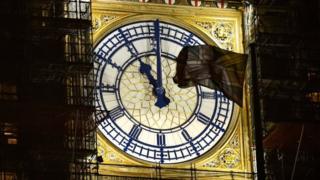 Getty ImagesBig Ben will not chime for Brexit, as it is undergoing renovation work

Little will change immediately, as the UK begins a “transition period”.……………Most EU laws will continue to be in force – including the free movement of people – until the end of December, by which time the UK aims to have reached a permanent free trade agreement with the EU.

Labour leader Jeremy Corbyn urged the country not to “turn inwards” and instead “build a truly internationalist, diverse and outward-looking Britain”

The Archbishop of Canterbury, Justin Welby, told BBC Radio 4’s Today programme: “We must be united in a common vision for our country, however great our differences on achieving it – a common hope for what we want to happen, and what we want to do in the years to come.”

Former Prime Minister David Cameron, who led the campaign to remain in the EU during the 2016 referendum, called it a “very big day for our country”, adding that he believed the UK could “make a success of the choice that we made”

And Brexit Party leader Nigel Farage said: “At last the day comes when we break free. A massive victory for the people against the establishment.”