#AceNewsReport – Feb.03: Police in South Africa have launched a manhunt for killers of nine illegal miners who were stoned to death in a western district of Johannesburg: The bodies of the miners from Lesotho were found lying in the streets of Matholeville, while another seriously injured victim was rushed to hospital: Thousands of illegal miners, known as “zama zamas” (“those who try their luck” in Zulu) work in the country. 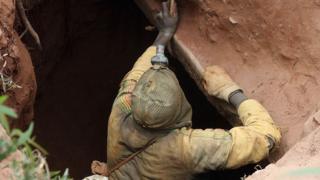 Violent clashes between rival groups of workers are commonplace, reports say: Friday’s attack came about 24 hours after the police raided the area: Police have arrested 87 people for questioning, but they are seeking more information.

“We condemn this barbaric attack and we will ensure we leave no stone unturned in making the people of Matholeville and Roodepoort to feel safe,” said Gauteng Provincial Commissioner Lt Gen Elias Mawela in a statement: “The suspects will be arrested as soon as possible and the police will not sleep until we find them,” he added: The police chief also said he had summoned officers from other units in Johannesburg to join in the manhunt.

South Africa is one of the most violent countries in the world over the human cost of South Africa’s mining industry according to the government data, at least 58 murders a day were recorded last year.