#AceNewsReport – Feb.03: Several streets in London’s central Soho district have been evacuated after an unexploded World War Two bomb was found: Police were called to Dean Street at about 13:50 GMT after the ordnance was discovered during building work: Soho Hotel, the Soho Theatre and the Groucho Club have all been evacuated: A police cordon is in place between Oxford Street, Charing Cross Road and Shaftesbury Avenue: Polly Cox, who works in a production company on Wardour Street, told the BBC she had to “call her mum and boyfriend” after being told to evacuate the area. 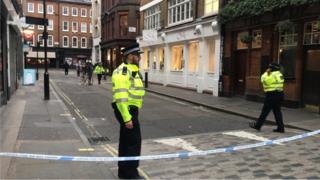 Soho is home to some of the capitals most popular bars, restaurants and theatres: The area is also famous for housing many of the largest distributors in the UK film industry……………Videos on social media showed groups of people fleeing buildings.