#AceNewsReport – Feb.08: The soldier opened fire at different locations in the city, which is more than 250 km (155 miles) from Bangkok, police spokesman Kissana Phathanacharoen said in a message to reporters: The shooter remained close to a shopping mall and had not yet been apprehended, the police said: Local media showed footage of the soldier getting out of a car in front of a shopping mall and firing a series of shots, sending people running. Gunshots could be heard on the video: Reuters reports. 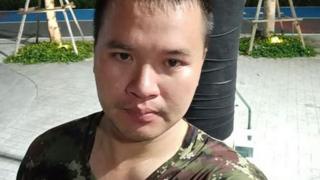 At least 12 people have been shot dead and many injured by a Thai soldier in the city of Nakhon Ratchasima (also known as Korat), police say:

A defence ministry spokesman told BBC: Thai that Jakraphanth Thomma, a junior officer, had attacked his commanding officer before stealing a gun and ammunition from a military camp…………..He then opened fire at a Buddhist temple and a shopping centre in the city, north-east of Bangkok……………..The suspect is still at large.

Posts on social media appear to show the scene of a shooting near the shopping centre: Authorities have been sealing off the centre as they try to track down the suspect.