#AceNewsReport – Feb.09: rain and widespread gales will bring disruption to the UK this weekend: The Met Office has issued several National Severe Weather Warnings for strong winds and heavy rain brought by Storm Ciara throughout the weekend, including an Amber warning for much of England and Wales on Sunday. Yellow wind and rain warnings have been issued for north-western parts of the UK on Saturday, followed by a yellow wind warning covering the whole UK for the entirety Sunday: Named by the Met Office on Wednesday, Storm Ciara is currently tracking eastwards towards the UK and Ireland.

Met Office Chief Meteorologist, Frank Saunders, said: “Storm Ciara will bring damaging winds and heavy rain across the UK this weekend and we have issued a range of severe weather warnings giving people time to prepare for potential impacts of the storm: “Winds will increase through Saturday across Northern Ireland, Scotland, northern England and Wales, before turning very windy across the rest of UK through the early hours of Sunday morning. Gusts of 50 to 60 mph are expected quite widely across inland areas, with even stronger gusts of 80mph or higher along coastal areas.” 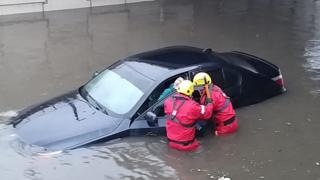 Severe gales and heavy rain are sweeping across the UK as travellers face disruption from Storm Ciara: Airlines have cancelled dozens of domestic and international flights, while several rail firms have urged passengers not to travel: Ferry passengers also face delays and cancellations, while drivers have been warned to take extra care.

Amber weather warnings for wind and heavy rain are in place for most of the UK, with gusts of up to 90mph expected: More than 150 flood warnings have been issued around the UK.

Heathrow Airport said it had taken the joint decision with its airline partners to operate a reduced timetable to minimise the number of flights cancelled at short notice: British Airways has cancelled some flights from Heathrow, Gatwick and London City, while Virgin Atlantic has posted a number of cancelled flights on its website.

Network Rail has imposed a blanket speed restriction of 50mph across the network on Sunday, warning passengers to only travel by train that day “if absolutely necessary” It said there was the potential for damage to overhead lines and tracks caused by debris or fallen trees: The rail firms which issued “do not travel” warnings for Sunday were Gatwick Express, Grand Central, Great Northern, Hull Trains, LNER, Northern, Southeastern, Southern, Thameslink and TransPennine Express………….Avanti West Coast said no trains would run north of Preston until further notice because of the impact of Storm Ciara……………………Southeastern train services between Sevenoaks and Orpington were disrupted by a trampoline blowing onto the line.

Ferry services have also been affected, with P&O cancelling some of its services between Dover and Calais:

Forecasters have predicted gusts of up to 90mph, and a 86mph gust was recorded in Capel Curig in Snowdonia, overnight: An amber warning for wind is in place across much of England and Wales until 21:00 GMT on Sunday. The Met Office advises wind-blown debris and large waves could pose a danger to life……Yellow weather warnings now cover the whole of the UK until midnight on Sunday………….An amber warning for rain is in place in parts of Scotland, meaning homes and businesses are likely to be flooded and some communities could be cut off by impassable roads.