#AceNewsReport – Feb.17: Editor says heres is the latest from across U.K. on #StormDennis and our weekend of chaos …………………Communities across Britain are facing another day of flooding and travel chaos, following the torrential rain brought by Storm Dennis: More than 300 flood warnings are still in place across the UK, including five severe warnings in England, which mean there is a danger to life: Rescue teams worked into the early hours to get stranded residents out of their homes by boat in Worcestershire. 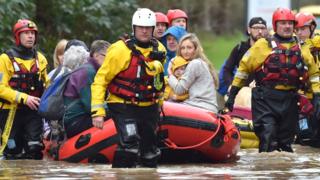 Travel continues to be disrupted across the UK, with A-roads closed in Staffordshire and Nottinghamshire in England, and Powys and Monmouthshire in Wales. Roads are also closed in parts of Scotland, including the M90 Friarton Bridge: Train services are affected on lines run by CrossCountry, Great Western Railway, Merseyrail, Northern, South Western Railway, Transport for Wales and Scotrail.

The south Wales valleys saw the highest water levels for more than 40 years over the weekend, according to Jeremy Parr, head of flood and risk management at Natural Resources Wales: Several schools have been closed and roads remain blocked by floods and landslips.

In Tenbury Wells, Worcestershire, residents were helped from their homes by boat overnight and the county council has warned that more evacuations could be necessary: A relief centre has been set up at the high school in the town, where around 130 properties were evacuated on Sunday.

In York, the River Ouse has reached 4.36m above its normal level and is expected to rise further: Thousands of sandbags have been placed around vulnerable properties near the river, which the Environment Agency warned could come close to record water levels seen in 2000.

Environment Secretary George Eustice told BBC Breakfast that the government has spent £2.5bn on tackling extreme weather conditions since 2015 and has committed to spending £4bn in the next five years: Responding to local criticism of the response to flooding in York, Mr Eustice said £80m has been spent on projects around the city to protect against flooding, and more are “in the planning stage”………….The government has activated an emergency funding scheme for areas affected by the flooding, which include parts of Nottinghamshire, Leicestershire, Derbyshire, Shropshire, Telford and Wrekin, Worcestershire and Herefordshire……………..Under the Bellwin scheme, local authorities can apply for the government to reimburse non-insurable costs above a certain threshold, which has not been specified.