#AceNewsReport – Feb.20: Federal prosecutors are treating the mass shooting — one of the deadliest in Germany in years — as an act of terrorism: Authorities believe the suspect, 43, returned home after the rampage and shot himself: He was found dead in his apartment early Thursday, along with the body of his 72-year-old mother. Both died from gunshot wounds, according to the region’s interior minister, Peter Beuth:

The total number of people killed — including the suspect — is 11, with another person seriously injured, added Beuth: Federal prosecutors have now taken over the investigation and there are “indications of a right-wing extremist background,” Reuters reported, citing a spokesman for the prosecutors. The suspect did not have a criminal record but he did have “xenophobic” material on his website, said Beuth.

The rampage began around 10:00 p.m. and appears to have centered around two shisha bars in immigrant areas of the city: After opening fire at the Midnight shisha bar, the suspect then fled by car to the Arena Bar and Cafe, where the attack continued: A police manhunt followed, and the attacker was later found dead in his apartment, along with the body of his mother: Shisha bars, or flavored tobacco bars, first started in the city’s Turkish community, and in recent years have become popular among young German people.

Kadir Koese, a 38-year businessman who runs a bar across from one of the bars that was attacked, said he heard shots being fired: “There was a guy lying on the sidewalk, shot in the head, I think. My neighbor said ‘get down’. The police came quickly,” he told Reuters. 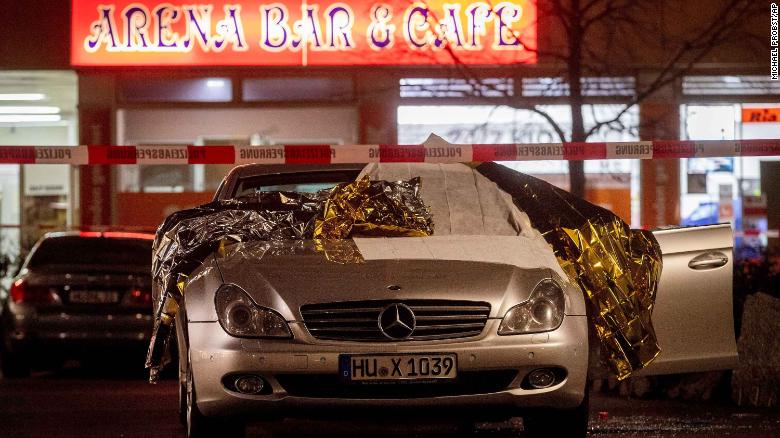 A car covered with rescue blankets stands in front of one of the bars that was attacked.

Can-Luca Frisenna, whose family members run one of the bars that came under attack, said he rushed to the scene after hearing about the shooting: “I heard my father was affected and my little brother, they run the kiosk,” Frisenna told Reuters. “They were horrified and they were crying and everything. So everyone was shocked.”

The suspect left a confession letter and a video, according to CNN affiliate RTL, citing police: His apartment has been blocked off and searched by special forces, and police said there were no indications that other perpetrators were involved.

In the wake of the shootings, Germany’s Foreign Minister Heiko Maas condemned the spread of right-wing attacks: “If the suspicion is confirmed, the gruesome act in Hanau is the third extreme right-wing murder attack in Germany in a year,” he said. “Right-wing terrorism has again become a threat to our country. There is absolutely nothing to put into perspective.”

The far-right Alternative for Germany party said it was “shaken by this terrible act.” “We believe that it is in the interests of the relatives of the victims if the crime and its background are clarified quickly,” it added in a statement. “The AfD group has full confidence in the investigative authorities that they will solve the crime quickly and completely.”

The regional parliament in Hesse, the state where Hanau is located, suspended all sessions Thursday.