#AceFinanceReport – Mar.25: London shares gained on Wednesday as an enormous U.S. stimulus package and evidence of moves by companies to deal with the financial effects of the coronavirus crisis offset the impact on markets of a surge in cases domestically: The blue-chip FTSE 100, FTSE, down 30% in the past month, on Tuesday saw its best day since the swings of the financial crisis of 2008: It had recovered another 4.1% by 09:35:GMT: as oil & gas companies, banks and drugmakers rose:

U.S. senators and the Trump administration reached an agreement on a $2 trillion package on Wednesday, expected to include $500 billion in direct payments to people and $500 billion in liquidity assistance: “In terms of the follow through, it’s quite encouraging to see this morning,” said Roger Jones, London & Capital’s head of equities. “We have a situation where all the central banks and governments are saying we’ll do whatever it takes.”

The FTSE 100 is up about 15% since hitting an eight-year low last week as the Bank of England cut interest rates to a record low and the government promised businesses loan guarantees and offered to pay 80% of their wage bills if they put staff on leave rather than sack them: The FTSE midcap index .FTMC has recovered nearly 20% since last week’s low.

British travel-food company SSP (SSPG.L), however, rose 15% as it launched an emergency issue of shares worth 20% of its equity capital as it laid off staff and cut spending to try and ride out the coronavirus-driven collapse in air travel:

“Clearly equity raisings at these levels are very dilutive, and I think it’s going to cause significantly less attractive return for investors when markets start to recover: Companies that raise equity are the companies that investors should look to avoid,” London & Capital’s Jones said.

Bicycles and car products retailer Halfords (HFD.L) surged 50% after saying it was confident that it could operate within its debt facilities, although it warned of a 25% drop in sales and suspended its dividend: 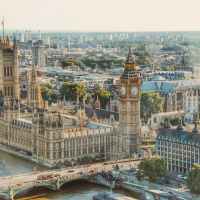