#AceNewsReport – June.06: The man suspected by German police of murdering missing British girl Madeleine McCann is currently in a German jail and has many previous convictions: German media name him as Christian B, 43. Suspects’ surnames are not usually revealed for privacy reasons: He is believed to have been in the area where Madeleine, three, disappeared while on holiday in Portugal in 2007: He is serving a jail term in Kiel, Schleswig-Holstein, for drug-dealing, having been extradited from Portugal in July 2017:

Madeleine McCann: Who is the German suspect? https://www.bbc.co.uk/news/world-europe-52937626 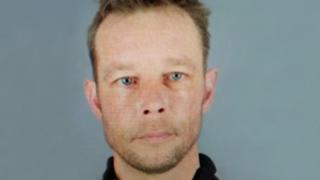 A picture of the suspect, Christian B

But there is also an ongoing case against him for rape. In December 2019, he was sentenced to seven years by a court in Braunschweig for raping a 72-year-old American woman in Portugal in 2005: That took place in Praia da Luz, only one-and-a-half years before Madeleine went missing in the same resort in 2007. He allegedly tied the woman up and gagged her, raped her in her bedroom and forced her to hand over cash: The rape conviction is, however, currently under review in the German courts, German n-tv news reports……………There was a legal challenge over extradition technicalities in the case:

German police say the suspect lived in Portugal’s Algarve holiday area between 1995 and 2007, doing odd jobs, including as a waiter, but also burgling hotel rooms and holiday flats: A senior judicial source in Portugal has told the BBC the joint police investigation into Christian B began after a tip-off in Germany in 2017……….The source said German investigators informed their Portuguese counterparts and British officials that they received a tip-off from a friend of Christian B, after the suspect had made a “disturbing comment” in a bar in Germany, as they were watching TV news coverage of the 10th anniversary of Madeleine’s disappearance………….Since that time, the official said Portuguese police have been making house-to-house enquiries speaking to those who knew him between 1996 and 2007.

Madeleine went missing shortly before her fourth birthday from an apartment in Praia da Luz on the evening of 3 May 2007 while her parents were with friends at a nearby tapas bar:

German media say Christian B has also been investigated over the disappearance of a five-year-old German girl – named only as Inga: She went missing from a family party in Saxony-Anhalt on 2 May 2015 and has never been found.

Born in Bavaria in 1977, he grew up in a children’s home: In 1994, WDR reports, a court in Würzburg gave him a two-year suspended jail sentence for sexually abusing a child. Christian B was 17 at the time……………..But in 1995 he moved to Portugal with his then girlfriend and began doing odd jobs on the south coast. They moved into a house together on the edge of Praia da Luz…………..At the time Madeleine disappeared the suspect was, police believe, living in a white VW Westfalia camper van with yellow skirting. Police are seeking any witnesses who remember seeing the van.

German prosecutors have described the suspect as “a sexual predator who has already been convicted of crimes against little girls” and was “serving a long sentence”.

Police have released photos of two vehicles – the VW camper van and a Jaguar car – which are believed to be linked to the man, as well as a house in Portugal………………The day after Madeleine vanished, the suspect transferred the Jaguar to someone else’s name.

Police have also released photographs of houses with which the suspect is believed to have been linked: It remains a “missing persons” investigation in the UK because the police do not have “definitive evidence” as to whether Madeleine is alive or not.