#AceHealthReport – June.06: Pre-booked parking spaces, fines for illegal parking and beach marshals are being used to prevent a repeat of last weekend’s influx of visitors to the Dorset coast: Thousands have flocked to the Jurassic Coast and Bournemouth beaches since lockdown restrictions were eased: Current government guidelines state that households can drive any distance in England to parks and beaches: 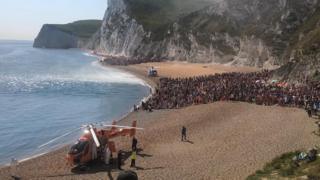 Following a meeting between Dorset Council, the emergency services and the landowner, a booking system for Durdle Door’s car park was announced to “monitor and limit visitor numbers” Marshals will also be on the beach to discourage tombstoning and to prevent littering, while civil enforcement officers will fine drivers illegally parked on roadsides: It is hoped cooler temperatures forecast for this weekend will reduce numbers heading for the coast:

‘ Dorset Police said Tuesday was one of its busiest days in recent years with 419 emergency calls received, compared to 265 on the same day last year ‘

Police and crime commissioner Martyn Underhill said anyone planning a trip should “search your conscience” He said: “The problem is the social distancing rule is a guideline from the government, there is no law behind it therefore the police and local authority can’t enforce it – that’s what’s so frustrating about what happened last weekend.”

Both Dorset councils had called on the government to impose travel restrictions, raising concerns that visitor numbers could increase Covid-19 cases in the county: When asked about the weekend’s scenes in Dorset at Thursday’s Downing Street coronavirus briefing, transport secretary Grant Shapps said: “When we say ‘stay alert’ we mean literally stay 2m away from people – don’t risk this spreading and the hard work we’ve all done: “There are fewer lifeguards around so if you are in the sea you are putting yourself at more risk. So there are lots of sensible reasons not to go and crowd out beaches and to avoid crowded places.”