#AceNewsReport – June.21: Statement from the Chief Constable, John Campbell about the terrorism incident in Reading:”As you will be aware, last night a murder investigation was launched by Thames Valley Police officers and this has now been declared a terrorism incident: “At 6.56pm we received a report that a number of people had been stabbed in Forbury Gardens in Reading:

Reading Chief Constable Statement: About a ‘ Terrorism Incident ‘ on Saturday night around 19:00hrs and ‘ fatal stabbing ‘ of three people

“Tragically, three people have died and others were injured in this attack: “Lives have been devastated and at this time the thoughts of all my officers and staff at Thames Valley Police are with those who have been affected in this tragic incident.

“Within five minutes of the first call, officers had apprehended a man and made an arrest: He remains in police custody at this time. I am sure we would all want to recognise the bravery of those police officers responding, but also that a number of members of the public were helping my officer’s and the victims at what was a very distressing scene. My thanks on behalf of Thames Valley Police goes to them too: “I would like to reassure you that at this time we do not believe there to be a wider risk and to reiterate that there is nothing to suggest that anyone else is involved in this incident: “I am not in a position to talk about the man who has been arrested or give any further details about this case as this is a live Counter Terrorism investigation. It is really important that we do not compromise the investigation in the interest of seeking justice for the victims.

“I would like to take this opportunity to ask the public and media to refrain from speculation: If you saw what happened or have a video of this incident please get in touch with police, rather than by sharing this on social media. You can do this by searching for UKpoliceimageappeal.co.uk or by calling 101: “It is also important to note that the process of contacting next of kin is ongoing. Please keep this in mind when commenting or re-sharing anything with regards to this incident, it is incredibly distressing for all those involved: “Overnight as the investigation continued I am aware that the community of Reading has been impacted to allow these enquiries to take place. I’d like to thank residents affected.

“Police cordons will continue to be in place and I understand this may cause some disruption to you but this is so vital so that police work can continue: “My officers and staff will remain in the community and you will see an increased police presence. If you have any concerns, please do not hesitate to approach them: “I would also like to thank the broader community of Reading for their support, patience and understanding. I am proud of your response as well as all of our emergency service partners and of course my officers and staff for their work throughout. 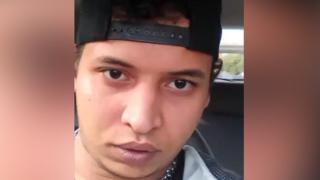 The man held on suspicion of killing three people at a park in Reading was known to MI5, security sources say: Khairi Saadallah, 25, from the town, was arrested at the scene on Saturday and police say they are not looking for anyone else over the terror incident: Sources told the BBC he is originally from Libya and came to the attention of MI5 in 2019: Khairi Saadallah, 25, was arrested at the scene by unarmed officers who have been praised for their “incredible bravery”…….He remains in police custody on suspicion of murder:

Reading’s Forbury Gardens were dotted with groups of friends relaxing in the early evening sunshine when the peace was shattered by a commotion and frantic shouts of “run”. Three people had been stabbed to death in an attack that has left the town reeling: “Everyone was just having fun and then suddenly a man shouted,” said Lawrence Wort, who had been sitting nearby:

The 20-year-old said he could not make out the words or in what language they were spoken……………What he could see was a man with a “massive knife”…………..”He stabbed the first person – they were sat in a circle in a big group of about eight to ten people – and he darted round anti-clockwise, got one, went to another, stabbed the next one, went to another and stabbed them.” As well as those killed in the attack, three more people were injured: