#AceSocialReport – June.23: The move means that Macs will run on the same type of chips as the firm’s iPhones and iPads, rather than Intel’s………………..Intel had faced problems manufacturing its own designs, leading it to issue a public apology to computer-makers.

Apple Mac computers make jump to its own chips 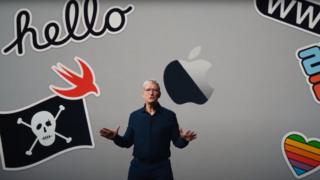 Apple: Tim Cook said it was a “historic day for the Mac”

Apple’s challenge will be to carry off the transition smoothly and convince third-party developers to update their apps accordingly: “We expect to ship our first Mac with Apple silicon by the end of the year,” said chief executive Tim Cook, adding that it would likely be two years before its full product line had made the jump.

The firm said the move would allow it to offer new features and improved performance as well as making it easier for developers to “write and optimise software for the entire Apple ecosystem”.

The announcement was made at Apple’s annual Worldwide Developers Conference (WWDC) “Apple’s motivations for doing this include reducing its dependence on Intel, maximising its silicon investment, boosting performance and giving itself more flexibility and agility when it comes to future products,” commented Geoff Blaber from the consultancy CCS Insight…………………”Embracing ARM and making its hardware more consistent across the iPhone, iPad and Mac ranges is a strategic necessity, but there will be inevitable bumps along the road.”

Apple said it had already developed native versions of several of its own apps, including Final Cut Pro X and Logic Pro. iPhone and iPad apps will also be able to be run on the computers: Apple said that Microsoft was working on an optimised version of Office, and Adobe was developing a version of Photoshop…………………Other developers should be able to recompile their apps to get a version running “in just a matter of days,” said the company’s software chief Craig Federighi. He added that old apps would automatically be translated at point of installation to run, although they would not work as well………..To mark the significance of the move, MacOS will move to version 11. Since 2001, it had only moved from 10.0 to 10.15.