#AceNewsReport – June.29: Deborah Short was on social media in March when she came across gruesome photos appearing to show decapitated sea lions along the shores of eastern Vancouver Island: Then in April, while out for a walk with her dog in Neck Point Park, north of her Nanaimo, B.C., home, she said she witnessed in person what she had seen online…………”Clearly, the [body] had been decapitated,” Short said…………..”Not only was I horrified, I was angry. It was beyond me how anybody could possibly harm such beautiful creatures,” she said:

Headless sea lions are washing up on Vancouver Island — and some believe people are to blame CBC.ca/

It wouldn’t be the first time she came across a headless sea lion. She said she found another while out for a walk on June 10, along with a seal that had been skinned nearby: Marine mammal zoologist Anna Hall with Seaview Marine Sciences says she is aware of headless sea lions washing up on the coast between Nanaimo and Campbell River, around 150 kilometres northwest……………”From what I can tell from the photos I’ve seen, these are Steller sea lions, which are a species at risk in Canada,” said Hall. 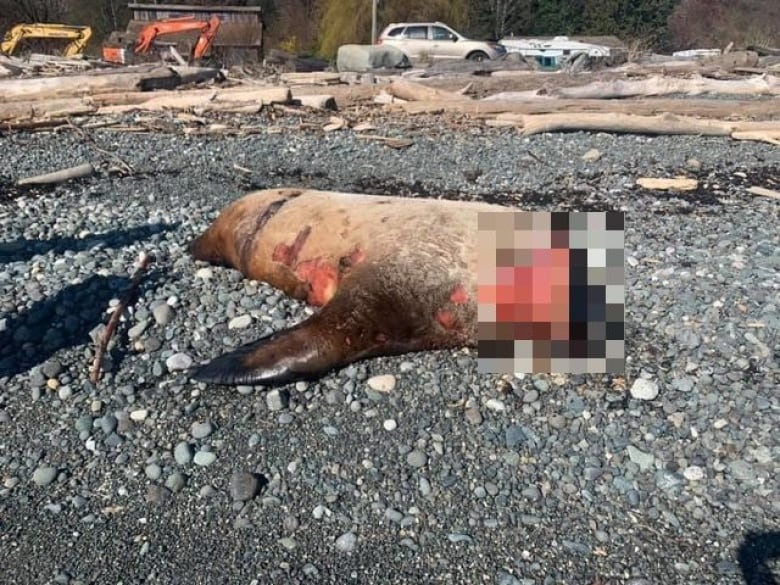 A sea lion missing its head was found in Campbell River, B.C., in March of this year. (Submitted by Deborah Short)

Steller sea lions’ natural predators include transient killer whales and sharks: But Hall says the decapitations are unlikely to be caused by another animal: “It seems more likely that it is human caused,” Hall said………………..It’s not the first time marine mammals have been found washed up on Canadian shores without their heads.

“Its really important to think of the big picture in terms of the recovery of our local waters because they have sustained some pretty significant human pressures over the past 200 years,” said Hall: Jordan Reichert, director with the non-profit Animal Alliance Canada, has reached out to Fisheries and Oceans Canada (DFO) in relation to the sea lions found without their heads: “I’ve been asking them to look into the issue more because it’s of grave concern. This isn’t a new issue,” said Reichart.

On Monday the DFO said it has seen a “slight increase” in reports of dead sea lions washing up on the shores of Vancouver Island, but noted it is “a fairly common occurrence.” “Typically, the animals are washed up intact. However, from time to time individuals may tamper with the animals once beached. If this is determined to have been done in an effort to knowingly tamper with evidence, this would be an offence under the Criminal Code of Canada,” read a statement emailed to CBC News……………”DFO’s Conservation and Protection Branch are aware of pinniped-related social media activities and are monitoring these closely.”….Reichart said he wants to see DFO catch the poachers responsible, and carry out more patrols on the water so that potential poachers are aware the areas are being protected from marine life abuse.

It’s a sentiment echoed by Deborah Short: “I’m heartbroken. I’m devastated by it,” she said. “And I want to see stronger laws for protection of our seals and sea lions along our coast.”