#AceNewsReport – July.02: Maxwell was taken into custody and is expected to appear in court later Thursday, the source said: Maxwell, the longtime friend of Epstein, has been under investigation for facilitating Epstein’s recruitment of young girls and women. Maxwell has been named in multiple lawsuits by women who said they have been abused by Epstein.Maxwell has denied any wrongdoing: 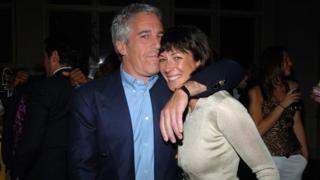 Getty ImagesJeffrey Epstein and Ghislaine Maxwell in New York in 2005

British socialite Ghislaine Maxwell, an ex-girlfriend of disgraced financier Jeffrey Epstein, is facing charges in the US after being arrested by the FBI: The six charges include enticing a minor to travel to engage in illegal sex acts and two counts of perjury.

She was reportedly arrested in New Hampshire and is due in federal court later: She has denied any involvement in or knowledge of Epstein’s alleged sexual misconduct:

Epstein died in prison on 10 August as he awaited, without the chance of bail, his trial on sex trafficking charges: He was arrested last year in New York following allegations that he was running a network of underage girls – some as young as 14 – for sex. His death was determined to be suicide.

What are the charges?

What is the background?

Some of Epstein’s alleged victims say Ms Maxwell brought them into his circle to be sexually abused by him and his friends: One of Epstein’s alleged victims, Virginia Giuffre, has accused Ms Maxwell of recruiting her as a masseuse to the financier at the age of 15……….Details of that allegation against Ms Maxwell emerged in documents unsealed by a US judge last August in a 2015 defamation case………..Other women have also made allegations that Ms Maxwell was involved. One, Sarah Ransome, told the BBC’s Panorama that Ms Maxwell “controlled the girls. She was like the Madam”.

Ms Maxwell has denied any wrongdoing:

Who is Ghislaine Maxwell?

Ms Maxwell is the daughter of late British media mogul Robert Maxwell: A well-connected socialite, she is said to have introduced Epstein to many of her wealthy and powerful friends, including Bill Clinton and the Duke of York (who was accused in the court papers of touching a woman at Jeffrey Epstein’s US home, although the court subsequently struck out allegations against the duke)…………….Buckingham Palace has said that “any suggestion of impropriety with underage minors” by the duke was “categorically untrue”…………..Ms Maxwell has mostly been out of public view since 2016: In a BBC interview last year, the Duke of York said he had met up with Ms Maxwell last year, before Epstein was arrested and charged.

However they did not discuss Epstein, he said:

Last month a US prosecutor said Prince Andrew had “sought to falsely portray himself” as eager to cooperate with the inquiry into Epstein.

US attorney Geoffrey Berman said Prince Andrew had “repeatedly declined our request” to schedule an interview…………..The duke’s lawyers previously rejected claims he had not co-operated, saying he offered to help three times…………………..Prince Andrew stepped away from royal duties last year after an interview he gave to the BBC about his relationship with Epstein.