#AceNewsReport – July.10: It appears the northwestern US state of Idaho hasn’t stopped shaking since a 6.5-magnitude earthquake swept through its Sawtooth mountain range, northeast of Boise, on 31 March: It was incidentally, the second largest earthquake to strike Idaho, according to the Idaho Statesman, trailing after 1983’s 6.9-magnitude Borah Peak quake: Since this latest one, the area has experienced a string of aftershocks, some registering as high as 4.8 on the Richter scale: The persistent after effects have been so strong that a popular beach along Stanley Lake in the Sawtooth National Recreation Area has sunk into the water:

A recent quake in the northwestern US was so strong, that a popular beach along Stanley Lake has almost fully submerged, with after effects still occurring:

Waves from the #IdahoEarthquake rolling through Alaska and the lower 48. Data from the @IRIS_EPO Data Management Center. Thanks guys for making it so easy to access seismic data! pic.twitter.com/M7aGex1zyV

“The most probable cause for the ‘disappearing’ of the inlet delta is a combination of liquefaction and compaction of saturated sediments and some possible sliding and later spreading on the delta toward the deeper part of the lake”, Claudio Berti, director and state geologist from the Idaho Geological Survey, said in a statement on 9 May, with the aftershocks continuing further, reinvigorating seismologists’ interest in the region.

Geologists are currently looking for clues to what exactly caused an earthquake in the otherwise quiet area – 16 miles north of the Sawtooth Fault, a 40-mile stretch of fault line discovered nearly a decade ago and since believed to be seismically inactive: While a number of scientists suspect the Sawtooth Fault is actually longer than assumed, according to Popular Mechanics, others suspect the fault is full-on taking advantage of openings in Earth’s crust and is slowly proceeding northward: One theory suggests energy from the Sawtooth Fault could have jumped to a nearby unknown fault, spawning the recent spate of earthquakes. The theory has scientific underpinnings, as according to a 2009 paper in the journal Nature, earthquakes that occur a long way from tectonic plate boundaries may actually be persistent aftershocks from bigger quakes from a distant past. 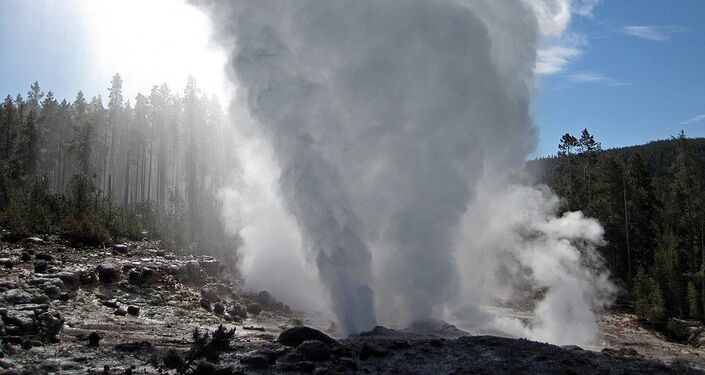 Now embarking on new missions to gather full seismic data and analyse local soil samples, researchers are set to use LIDAR, a top-notch technology for estimating distances by illuminating a target with laser light and measuring the reflection with a sensor to search for signs of movement in the area:

Even though Idago is still experiencing shakes, with the state proved to be full of old seismic faults, it doesn’t necessarily mean Yellowstone will face a new volcanic eruption any time soon: The Yellowstone Caldera last erupted 70,000 years ago, according to the US Geological Survey, and there have since been registered an eye-popping 10,000 magnitude 6 or higher earthquakes in the western swath of the country, with nothing close to the landmark supervolcano eruption ever taking place in our time.

According to USGS, Yellowstone has experienced three eruptions: 2.08, 1.3, and 0.631 million years ago, with an average of about 725,000 years between grand lava flows. That being the case, there is still about 100,000 years to go, the USGS website reads:

During evening rush hour, at roughly 5:52 p.m. local time, a large earthquake struck about 72 miles northeast of Boise. Perceived shaking for the quake was very strong. The event was widely felt, with close to 16,000 “Did You Feel It?” reports thus far submitted, but likely to have low impact.

The USGS is coordinating its response with the Idaho Geological Survey.