#AceNewsReport – July.12: The first minister has condemned attacks on police in north Belfast: Speaking on BBC NI’s Sunday Politics, Arlene Foster urged those involved to “ask themselves what sort of a Northern Ireland do they want to live in?”………..The police said officers from Tactical Support Group were deployed to the area……….On Saturday night officers were attacked in the North Queen Street area near the New Lodge flats and a small fire was started in the middle of the road………..Officers dressed in riot gear carried out searches of the area, but were targeted along with police vehicles: 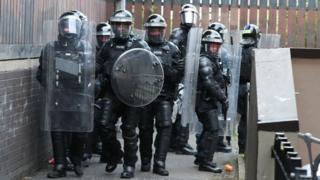 Supt Lorraine Dobson said: “As officers attempted to engage with youths in the area last night, they came under attack from youths, some of whom were masked, who threw bottles and masonry: “Damage has been caused to a number of our vehicles but, thankfully, none of our officers were injured: “We are again today appealing to young people who are involved in this type of criminal and anti-social behaviour to stop. You need to realise the consequences of your actions, and the impact it has on the community.”

‘ She also appealed to parents and guardians to “know where your young people are, who they are with and what they are doing” and for those in the community with influence “to ensure we do not see a repeat of this senseless activity” “We will deploy the necessary resources to detect and deter those responsible in a proportionate manner, and we will seek to gather evidence to bring those responsible before the courts, whether through evidence gathering or arrests at the time,” added Supt Dobson ‘

Over the course of Friday evening, a piece of furniture was also set on fire in the middle of North Queen Street and it was reported that youths were throwing stones at houses and passing cars: Ch Insp Peter Brannigan said on Saturday “there will be consequences for those choosing to engage in this type of behaviour”……