#AceNewsReport – July.22: “ According to the USGS, the quake hit at about Tuesday 11:12 p.m. PST: It had a depth of six miles and was centred 60 miles south-southeast of Perryville, Alaska: The quake prompted a tsunami warning to be issued for South Alaska, the Alaska Peninsula and the Aleutian Islands. It was not known if the temblor caused any damage or injuries: It was felt as far away as Anchorage, which is about 500 miles away: For other U.S. and Canadian Pacific coasts in North America, there is no tsunami threat: The National Weather Service also said there is no tsunami threat to the California coast.” https://t.co/Agu3glSvwe

Preliminary magnitude 7.8 #earthquake strikes off coast of Alaska with tremor felt as far-wide as Anchorage no injuries reported

An earthquake with a magnitude of 7.8 struck off southern Alaska’s coast late Tuesday, shaking the Alaska Peninsula and briefly sparking tsunami concerns before officials said no destructive waves were coming: The earthquake was centered in the Pacific Ocean about 60 miles southeast of Perryville on the sparsely populated Alaska Peninsula, striking around 10:12 p.m. local time (2:12 a.m. Wednesday ET) The Alaska Peninsula protrudes from mainland Alaska and is flanked to the southwest by the Aleutian Islands.

Reports of significant damage, if any, weren’t immediately available: A tsunami warning initially was issued for south Alaska and the Alaska Peninsula, but was canceled by early Wednesday, according to the National Oceanic and Atmospheric Administration.
The warning sent people to higher ground in cities like Sand Point, an island community of about 1,000 people off the peninsula, the Anchorage Daily News reported.

People in Sand Point gathered at a high school until shortly after midnight, when officials gave an all-clear, Jordan Keeler, an Anchorage-based city administrator, told the newspaper: “The first wave didn’t materialize, which is a great thing,” Keeler, who was in contact with staff in Sand Point, told the Anchorage Daily News. No reports of major structural damage were made on the island, Keeler told the newspaper. 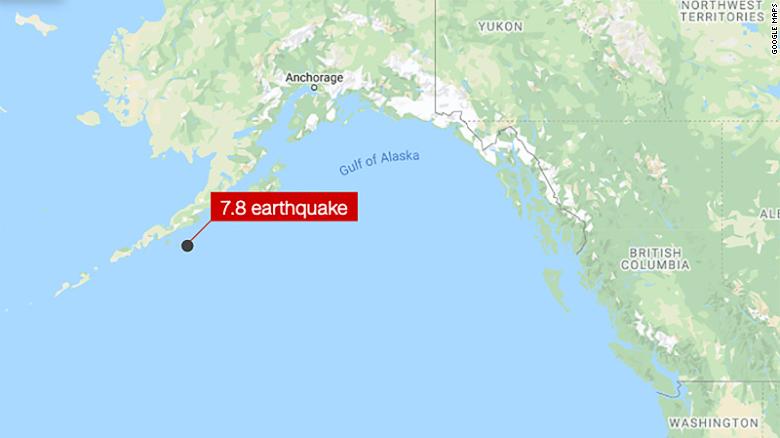 A magnitude 7.8 earthquake struck off the coast of Alaska late Tuesday.

“Anything below 70 kilometers is considered a shallow quake,” CNN meteorologist Allison Chinchar said: “That’s important, because shallow earthquakes often cause the most damage, compared to the ones that are deeper, regardless of the strength.”……More than 20 aftershocks followed the quake late Tuesday to early Wednesday, ranging from magnitudes of 2.8 to 6.1.