#AceNewsReport – July.30: “The silverback, known as Rafiki, was the leader of a group of more than a dozen gorillas known as the Nkuringo troop, which has been popular with visitors to Uganda’s Bwindi Impenetrable National Park for decades: The nearly 80,000 acre UNESCO World Heritage Site is home to nearly half of the world’s mountain gorillas and has long drawn tourists from around the world hoping to catch a glimpse of the rare species.” ﻿

“We are relieved that Rafiki has received justice and this should serve as an example to other people who kill wildlife,” Sam Mwandha, Uganda Wildlife Authority’s executive director, said in a statement released Thursday. “If one person kills wildlife, we all lose.”

“Mr. Felix pleaded guilty to three counts that included illegal entry into the protected area, killing a gorilla and killing a small antelope known as a duiker, the Uganda Wildlife Authority said the statement: Mr. Felix said he had gone hunting with another poacher when they came across the group of gorillas. Rafiki charged, he told the authorities, and he killed the silverback with a spear.” 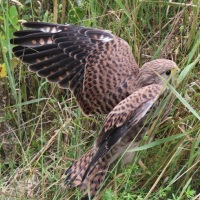