As police and council officers are patrolled the seafront in Bournemouth and Poole as thousands descend on the towns’ beaches on the UK’s hottest day of the year: In June, a major incident was declared in Bournemouth because of the crowds: Concerns have also been raised about the number of people in Brighton: Brighton and Hove City Council said large numbers were making it “impossible to maintain physical distancing” And in Kent, Thanet District Council said some of its most popular beaches were full: 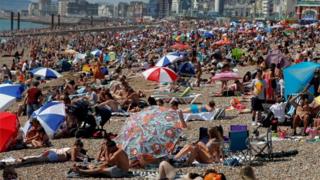 Meteorologists said temperatures recorded at Heathrow had reached 37.8C (100.04F), making it the third warmest day ever recorded in the UK: Dorset Police said its officers would be working longer shifts and some had their rest days cancelled to cope with the anticipated influx of visitors over the summer.

By 11:00 traffic marshals were already turning people away from Sandbanks car park and residents were urging the council to close the road: By mid afternoon, nearly all of the seven-mile stretch of beach between Poole Harbour and Highcliffe was marked as red on the council’s beach app, meaning “avoid, safe social distancing not possible”.

Dorset Council said car parks at Lulworth and Durdle Door, on the Jurassic Coast, were also full and urged visitors to go elsewhere: