#AceNewsReport – Aug.12: It is thought the train hit a landslide after heavy rain and thunderstorms which caused flooding and travel disruption across Scotland: Six people have been taken to hospital, although their injuries are not believed to be serious: The incident involved the 06:38 ScotRail service from Aberdeen to Glasgow Queen Street: 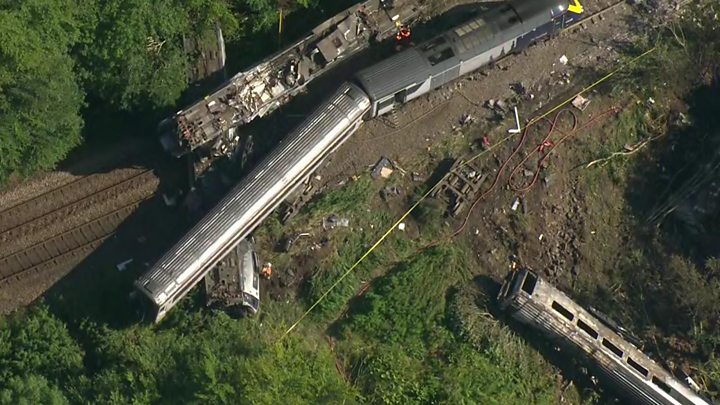 British Transport Police said the driver’s family had been informed and were being supported by specially-trained liaison officers: Efforts were continuing to inform the families of the other two people who died.

Ch Supt Eddie Wylie said emergency services were still at the scene dealing with the “major incident” “I would like to reassure the public that this was not a busy service and from CCTV inquiries and witness statements we believe all passengers have been accounted for,” he said: “Once the area has been made safe then a full and thorough search will be conducted, which is likely to take some time: “I know many people will understandably have questions and we will be working closely alongside the Rail Accident Investigation Branch and the Office of Rail and Road to establish the full circumstances of how the train came to derail.”………..Early indications are that the heavy rain could have been the main factor in causing today’s crash in Aberdeenshire: One rail industry source says the 06:38 service from Aberdeen to Glasgow was initially halted because of flooding on the line: The driver apparently contacted control to ask permission to switch tracks: It’s believed the train reversed and switched to clearer tracks and then continued on its route to Glasgow: Then it is thought the train hit a landslide and derailed……….However, this initial, unconfirmed version of events should now be closely examined by the UK’s Rail Accident Investigation Branch: Its job is to establish all the facts: The train’s computer systems should show key indicators like the speed it was travelling at when it left the track:

First Minister Nicola Sturgeon expressed her “deepest condolences” to the loved ones of those who lost their lives in the “tragic incident”…………..”My thoughts remain with everyone affected,” she said.

The train which derailed was made up of two locomotives – at the front and back – and four carriages: It is understood that the front locomotive and three passenger carriages left the track and came to rest on an embankment.

British Transport Police said its officers had been called to the scene at about 09:43: A few minutes later, Network Rail tweeted that there had been reports of a landslip at Carmont and that services between Dundee and Aberdeen had been halted: The chief executive of Network Rail, Andrew Haines, is cutting short his family holiday in Italy to fly back to the UK.

‘ NHS Grampian confirmed it was on a “major incident footing”, and ScotRail said it was assisting the emergency services ‘

The RMT union’s Mick Lynch said: “The facts behind this ‎incident will need to be established in due course, but at this stage we are focussed on support and assistance and our thoughts are with all those impacted by this tragedy.” 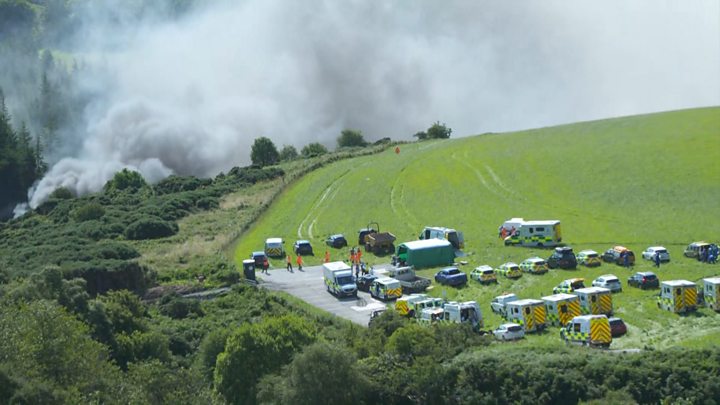 Kevin Lindsay, Scotland organiser for the Aslef train drivers union, said: “Our thoughts tonight are with all those who died, and who were injured, in the tragic accident: “While it is too early to speculate about the causes of the crash, it would seem that the appalling weather conditions in the area – the torrential rain – resulted in a landslip which, in turn, caused the train to derail.”

A centre for family and friends affected by the incident has been opened by NHS Grampian at Midstocket Church in Aberdeen: Those affected can either visit the church or phone 01224 319519.