#AceNewsReport – Aug.20: Hashem Abedi (08/04/1997) Six week trial concluded in March 2020 that found Abedi guilty of 22 counts of murder, attempted murder and conspiracy to cause an explosion likely to endanger life: Hashem plotted with his brother Salman in the months leading up to the attack, building a bomb that was detonated by Salman while people left the Manchester Arena following a music concert:
Manchester Arena Terrorist Attacker ‘ Hashem Abedi ‘ who conspired with his brother to commit murder of 22-people has today Thursday been sentenced to serve a minimum of 55yrs-in-prison 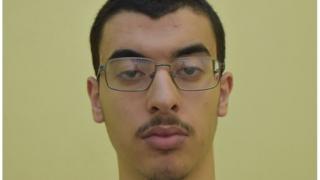 GMPHashem Abedi was arrested in Libya the day after the bombing

Hashem persuaded close acquaintances to purchase chemicals that could be used to manufacture explosives, sourced metal drums that were used to build bomb prototypes and bought a white Nissan Micra car that was used to store bomb components in Manchester while the brothers were in Libya: He also acted as his brother’s driver, travelling with Salman between addresses on Lindum Street, Rusholme and Somerton Court, Blackley where the brothers manufactured explosives: After helping Salman accumulate materials needed to construct the final version of the bomb, the pair flew to Libya to see family on 15 April 2017: While abroad, bomb components were stored in the Nissan Micra, parked near Devell House in Rusholme, before Salman returned to Manchester and created the final version of the bomb in a flat at Granby House in the city centre: Salman detonated the device he and his brother created during the evening of 22 May 2017, killing himself and 22 other people, and injuring almost 1,000 members of the public: Hashem was arrested in Libya the following day and successfully extradited to the UK on 17 July 2019:
Chief Constable of Greater Manchester Police, Ian Hopkins, said: “Today marks the end of a three year quest for justice, following one of the worst terrorist attacks this country has seen, and one of the darkest days in our city’s history: “Of course, for the families and friends of those twenty two souls whose lives were brutally cut short that night in May 2017, the pain will never fully diminish: “I know that no sentence will ever make amends for their loss, nor the suffering of the more than 1,000 people injured – many seriously or left with deep psychological wounds – who continue to live with the effect of this cowardly attack: “I can only hope it brings some small measure of comfort to them that Abedi will spend the vast majority of the rest of his life behind bars – where he belongs: “The division and hatred he sought to foster was, amidst the pain, met by strength and unity – by the courage of the victims’ families, the bravery of the survivors and the kindness and generosity of Greater Manchester as a whole: “As we move forward from today I will choose to remember that enduring spirit – of a city galvanised against hatred that will never forget, nor fail to support those who continue to be affected.”

Deputy Mayor for Policing, Crime, Criminal Justice and Fire, Bev Hughes, said: “Today, and every day, our thoughts are with those lost and their loved ones, those who were injured and everyone affected by the events of 22 May 2017: “I would like to pay tribute to the dedicated officers and staff of Greater Manchester Police whose painstaking forensic investigations secured Abedi’s conviction and to the many other people who also worked tirelessly to secure his extradition and bring him back to face justice: “While it is disappointing that Abedi couldn’t be given full life sentences due to his age at the time of the attack, I’m pleased the judge in this case has handed him the most severe penalty possible: Hashem Abedi has shown no remorse for his actions and the families of the victims were forced to endure a long and painful trial. He was not even in court to receive his sentence: “I also want to remind the public that support is available for anyone who has been affected by this case and today’s sentencing, which may have triggered painful memories for those involved.

Support is available via the Manchester Resilience Hub on 0333 009 5071 or visit GMVictims.org.uk.”