#AceNewsReport – Aug.21: A man has been jailed for murdering an athlete on a London Underground platform in a “chance encounter” fight: Alex Lanning, 22, stabbed Tashan Daniel in the heart as the 20-year-old went to watch Arsenal play last September: Lanning claimed the murder weapon, a Nato military knife, was taken from the set of the Fast and Furious film: He was jailed by Judge Mark Dennis QC for at least 25 years for what he called a “dreadful display of violence”……….Mr Daniel was stabbed as a train pulled into Hillingdon station after “violence erupted” on the platform: 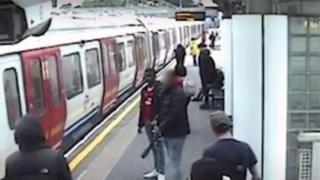 The Old Bailey heard Mr Daniel, an aspiring athlete who had dreams of making it to the Olympics, was with his friend Treyone Campbell when they were confronted by Lanning and his friend Jonathan Camille, 20: Lanning, from Hillingdon, had asked Mr Daniel “what he was looking at” across the Tube tracks before a fight ensued: He used a £200 German-made knife, which had been “designed for NATO military aircraft rescues with the capacity to saw through laminated glass and cut through seatbelts”, to inflict the deadly blow: Lanning claimed he came into possession of it when he had been working on the latest Fast & Furious action movie, F9: The pair then fled the station, discarded their clothes and the murder weapon in a nearby estate, and changed into floral pyjamas and went on the run for 10 days before being arrested:

After they were convicted, the BBC revealed Lanning was still on licence when he killed Mr Daniel, having been previously jailed for stabbing a man 11 times in Brighton in 2016: Passing sentence, Judge Dennis said this was an aggravating factor in Lanning’s jail sentence: He added: “The deceased had just turned 20 two days before, he was a dedicated and talented athlete and he had a promising future before him: “His and Treyone Campbell’s lives could not have been further from the violence and aggression which they were unexpectedly subjected to on that day: “The violence lasted no more than 34 seconds and was a chance encounter across the platform: “Mr Daniel died from a deep wound that pierced his heart and you [Lanning] went to hide the knife: “You were twice seen laughing and your act took away Mr Daniel’s life.”Jonathan Camille, 20, from Kensington, was sentenced to six-and-a-half years in a young offenders institute after being convicted of manslaughter:

Mr Daniel’s 15-year-old sister Oceanna read out an impact statement in court, saying his friends, family and community “were robbed of such a beautiful innocent soul” “This was a horrific crime committed by heartless individuals,” she said: “I ask myself questions such as ‘if this was an accident, why didn’t you stop to help, why didn’t you assist police and why did it take so long for the police to arrest you?’…………….”Tashan was a kind person with a good soul and that is why I am proud he is my brother.”