#AceWeatherReport – Aug.23: Tropical Storm Laura continues to move across the Dominican Republic Saturday evening. The current forecast brings Laura right over all of the Caribbean Islands, including Hispaniola and Cuba. Both of these islands are quite mountainous and will slow any strengthening through Monday:

As of the 11 p.m. advisory, Laura is 25 miles southeast of Santo Domingo, Dominican Republic, with maximum sustained winds of 50 mph. It’s moving west northwest at 16 mph: Models trends take Laura farther west, away from Florida. The current forecast shows a potential landfall somewhere along the northern Gulf Coast States from Mississippi to Texas. ﻿ 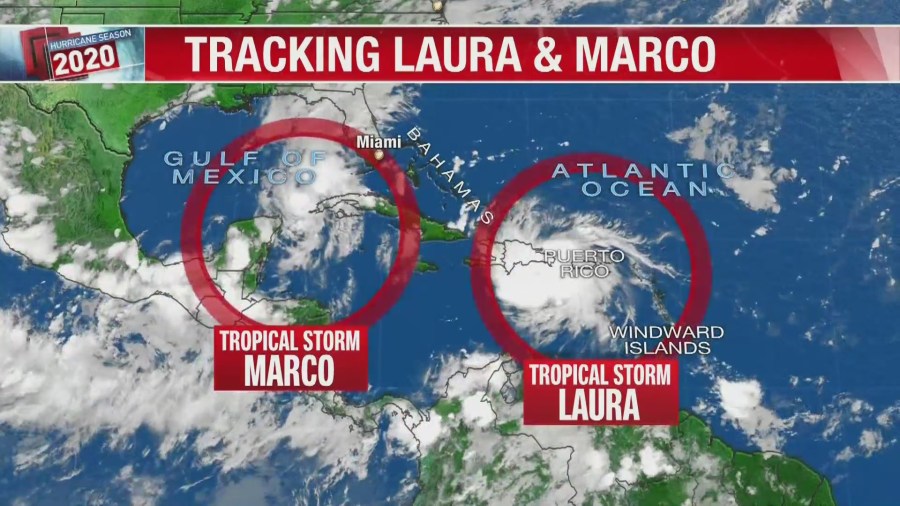 During Saturday evening, Marco beat Laura to the Gulf of Mexico and will stay ahead of Laura through its lifespan. Any interaction between the two storms will keep both of them weaker but for now, the timing of the storms do not bring them close enough for any interaction.

According to the 11 p.m. advisory, the storm’s center is moving through the Yucatan Channel about 110 miles northwest of the western tip of Cuba. It’s moving north northwest at about 13 mph with maximum sustained winds of 65 mph.