#AceNewsReport – Aug.26: The violence occurred during a confrontation between protesters and a group of armed men, the newspaper said: Unrest broke out in Kenosha after Jacob Blake was shot by police on Sunday: Footage shared online showed people running through the streets of Kenosha as gunshots could be heard. Other footage showed wounded men lying on the ground: Further details of what happened were not immediately available: The governor of Wisconsin is sending more National Guard troops to the city: 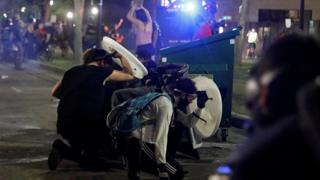 Within hours of Mr Blake’s shooting, hundreds of people had marched on Kenosha’s police headquarters: Cars were later set alight, and police urged 24-hour businesses to consider closing because of “numerous” calls about armed robberies and shots being fired: On Monday, Governor Evers called up the National Guard to aid local police and imposed a night-time curfew on Kenosha. Police backed up by the National Guard used tear gas, rubber bullets and smoke bombs, protesters said. Some demonstrators were seen attacking cars and property with baseball bats, news agency Reuters reported:

On Tuesday hundreds of protesters marched through the city: A small group threw fireworks and water bottles at police, who responded with rubber bullets and tear gas: Protests have also spread to a number of other cities, including Portland, Oregon and Minneapolis, Minnesota.

Lawyer Ben Crump told a press conference on Tuesday that doctors said Mr Blake had been paralysed by the shooting: “His family believe in miracles, but the medical diagnosis right now is that he is paralysed and, because those bullets severed his spinal cord and shattered some of his vertebrae, it is going to take a miracle for Jacob Blake Jr to ever walk again,” he said: The 29-year-old, shot as his young sons sat in the car, was also left with holes in his stomach, an arm injury and damage to his kidney and liver. Most of his colon and small intestine had to be removed, his lawyers told reporters:

His mother Julia Jackson told the press conference her son had been “fighting for his life”, but said if he “knew what was going on as far as that goes, the violence and the destruction, he would be very unpleased”…………………….Buildings and cars have been left damaged following protests over the shooting in the city of about 100,000 on the south-western shore of Lake Michigan.

On Tuesday, Governor Tony Evers said he would send more National Guard troops to Kenosha to protect state buildings and support first responders and firefighters: A state of emergency has also been declared in Wisconsin, as protesters clashed with police for a third night: Mr Blake’s shooting comes as the US grapples with the treatment of African-Americans at the hands of law enforcement, as well as wider questions about racism in society, since the death in police custody in Minneapolis of another black man, George Floyd, in May.

In her speech, Ms Jackson addressed racism directly and called for “healing” .…”Do you understand what is going to happen when we fall – because a house that is against each other cannot stand.” Police say they were responding to a domestic incident when they went to the site of Sunday’s shooting but have given few other details: So far it is unclear who called the police, how many officers were involved, and what happened before the shooting: Footage of the incident show Mr Blake opening the door and leaning into the car, at which point one officer grabs his shirt and opens fire. Seven shots can be heard in the video, as witnesses shout and scream: Mr Blake’s fiancée Laquisha Booker, said the children – who witnessed everything as they sat in the back of the car – were screaming as their father was shot. 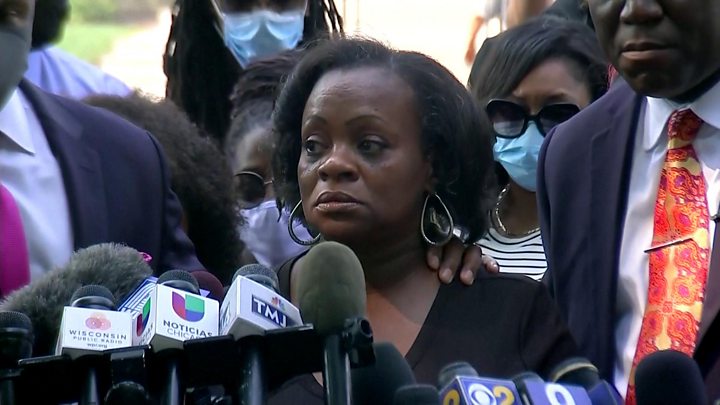 Jacob Blake’s mother: “Let’s use our hearts, love and intelligence to work together”

Lawyers for Mr Blake said he had been trying to “de-escalate a domestic incident”. Witnesses said the same to local media:

Wisconsin’s Department of Justice is investigating the incident in Kenosha, while the officers involved have been placed on administrative leave: A petition calling for them to be charged has garnered tens of thousands of signatures:

Mr Blake’s father has said he does not have confidence in the investigation: “Anybody that is white, that is doing an investigation about a black young man that was shot seven times in his back, and haven’t come up with an answer or a comment at this point, is not welcome,” he told reporters.