#AceNewsReport – Aug.31: Police have been attacked as they responded to a disturbance involving up to 30 youths in east Belfast: CCTV operators picked up the disturbance at the Bryson Street and Pitt Park interface on Saturday night, according to the PSNI:

PSNI Police Report: Attack by group of 30-youths as they respond to disturbance In Belfast: 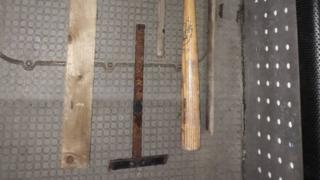 The youths ran from the area and officers subsequently found items that had been used as weapons hidden nearby: They included a baseball bat and iron bar: Officers were attacked with stones and bricks as they recovered the items:

In a Facebook post, the police in east Belfast said “enquiries will be made” and “CCTV followed up” to identify those involved in the disorder: