#AceNewsReport – Aug.31: A Glasgow nightclub has said it is “appalled” after a mass brawl broke out in its beer garden: Staff at The Sanctuary bar and club in the city’s west end had to control a large group of young men as the fight erupted on Saturday evening: Video footage of the incident was shared on social media, showing missiles being thrown and fighting between different groups: Police were later made aware, but no officers were sent: 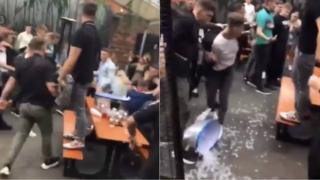 Customers could be seen moving out of the way of the fight as the men broke social distancing rules to throw punches at each other: At one point a large ice bucket was thrown across a table: The venue, in Dumbarton Road, is a nightclub with an outside bar/terrace area, where the disturbance took place:

A spokesman for the venue told the BBC: “The Sanctuary staff and management are appalled by the behaviour of a small minority of customers who have shown no regard for the safety and wellbeing of those around them: “We will work with the police to ensure those responsible are dealt with appropriately and they will be barred from the venue.”………..The management said that stewards intervened quickly and the groups involved were dispersed “safely and separately”.

They said: “At any time this behaviour is unacceptable, but never more so when faced with the current situation: “Sanctuary is committed to providing a safe Covid-secure environment through digital temperature checks and two-metre distancing in-line with government guidance.”The venue said full track and trace data was collected and no one was injured.

A Police Scotland spokeswoman said: “We received a report to make us aware of a disturbance at a nightclub on Dumbarton Road, Glasgow, around 19:40 on Saturday, 29 August: “The incident was reported to have happened around 19:00, it was believed there were no injuries, the incident was not ongoing and the group had left: “Due to the information given by the reporter and other ongoing incidents, no police attendance was required.”