#AceNewsReport – Aug.31: Police have criticised the “irresponsible” actions of an estimated 3,000 people attending an unlicensed rave near a rural village: South Wales Police said it had been called to the illegal event at Banwen on the edge of the Brecon Beacons: The force’s chief constable said it had not “seen this scale of event” before: 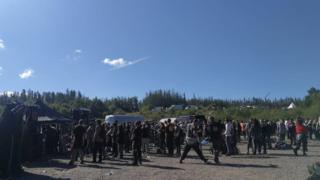 Richard SwinglerAn estimated 3,000 people have been at the event in the Dulais Valley in Neath Port Talbot

It comes as tougher penalties come into force in Wales, with illegal rave organisers facing unlimited fines or fixed penalties of up to £10,000…………The Welsh Government’s coronavirus restrictions allow for up to 30 people to meet outdoors but more than 500 at forest rave as new rules in force

“After everyone’s sacrifices during covid it’s totally unacceptable,” chief constable Matt Jukes wrote on Twitter………………“Those gathering in large numbers and engaging in antisocial behaviour will know that their actions are irresponsible,” said the force………………….”To the parents or guardians of young people, we would ask you ensure that you know where their children are and what they are doing.”

Chief Supt Simon Belcher from South Wales Police said: “This type of illegal gathering is totally unacceptable and we are aware of the concerns it is causing for the local community: “It has been estimated there are up to 3,000 people at the gathering who have apparently travelled from across the UK and we are looking at all pieces of legislation as to what action can be undertaken safely: “Unlawfully parked cars will be dealt with and people who continue, despite our advice, to try and attend this illegal event area being turned away.”

Police also warned drivers on the nearby Neath to Glynneath A4109 road to “be vigilant” as people have been seen near the road: On Wednesday, Dyfed-Powys Police used legal powers to disperse a group of 200 young people gathering in Burry Port, near Llanelli:

The force said it had intelligence to suggest a further gathering was being planned over the bank holiday weekend.