#AceNewsReport – Sept.01: UK PM Boris Johnson, however, has repeatedly vowed not to allow such a vote to go ahead: Speaking before the Scottish Parliament on Tuesday, Sturgeon revived the plans to hold a second independence referendum: A draft bill, detailing how and when the referendum should be held, will be unveiled before the next parliamentary elections scheduled for May: “Before the end of this [Scottish] parliament, we will publish a draft bill for an independence referendum — setting out the terms of a future referendum clearly and unambiguously to the people of Scotland,” Sturgeon said.🏴󠁧󠁢󠁳󠁣󠁴󠁿 @NicolaSturgeon has announced the publication of a draft Bill setting out the terms and timing of an independence referendum, as well as the proposed question people will be asked, before the end of this Parliament: 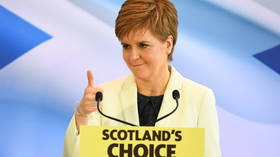 🗳 Scotland must have a choice. https://t.co/1TBOd5pYT1 pic.twitter.com/lgCzXqvBNS— Yes (@YesScot) September 1, 2020: The first independence referendum was held back in 2014, when the prospect of breaking free from the UK was rejected by some 55 percent of voters: Since then, however, the UK has endured the prolonged Brexit fiasco, as well as two changes of prime minister, and the results of a new vote might be different – especially since the majority of Scots supported the idea of remaining within the EU: Recent polls, for instance, indicated that if a new referendum happened this summer, more than 52 percent of voters would opt for independence:

The announced preparations for a new referendum appear to be largely symbolic for the time being. As Scotland has a devolved parliament, Westminster must greenlight such a referendum first, and Johnson has been perfectly clear in his repeated denials of the very possibility of it happening: Sturgeon, for her part, has repeatedly said she wants the poll to be completely legal and incontestable: